Should I Also Give Vitamins To The Wildlife I Care For? 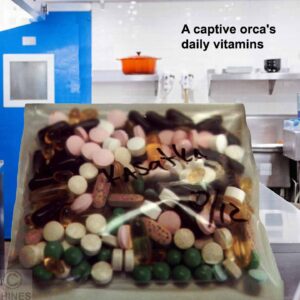 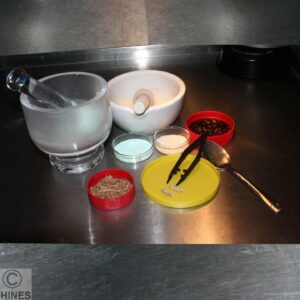 Should I Also Give Vitamins To The Wildlife I Care For?

If you feed the wildlife you care for an appropriate diet, there is no need to give additional vitamins. None of  the many vitamin supplements  that are marketed for wildlife, exotic animals, dogs or cats have ever been proven to improve health when the diets fed are similar to what they eat in the wild. And despite the fact that 70% of Americans over 65 take them, Johns Hopkins  doesn’t think  that vitamin supplements help people who eat balanced diets either. (ask me for Hopkins2013) In all cases giving excessive amounts of vitamin A, D, E, and trace minerals to animals and people is toxic. None of the vitamin supplements or tonics marketed for wildlife that I know of are based on reliable scientific studies or field data. When it comes to the bird tonics, the only data we have are the spotty 1994 NRC tables on the requirements of domestic chickens and turkeys. How could science-based wildlife supplement for birds be formulated when we don’t know what normal vitamin levels are in wild birds? I believe that at best, these avian tonics will do no harm to the wildlife you are caring for. However that is not true for carnivorous animals that are not fed whole prey: 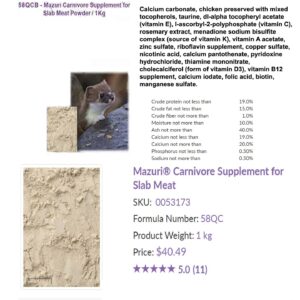 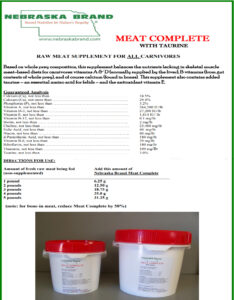 What About Carnivorous Wildlife?

I have no connection to Mazuri®. But throughout a long career with wildlife I have learned to trust product produced by that company. If you are feeding an animal a Mazuri® diet, you are already getting all that wildlife veterinarian nutritionists know about the vitamin and other nutrient needs of that animal. Another problem with making non-natural wildlife’s diet nutritionally adequate with vitamin supplements, is that although that saves you time and money, it does not introduce the animals to the natural sources of the nutrients they will encounter once you release them. Zoos, these companies primary customers, aren’t going to let their display animals go. So they do not face the problem of teaching their carnivores how to catch their normal prey. Their meat eating animals generally do well when the slab meat diets they feed them are supplementing with Nebraska Packers Meat Complete™  or a Mazuri™’s carnivore supplement. Those are the only two commercial products I have experience using. 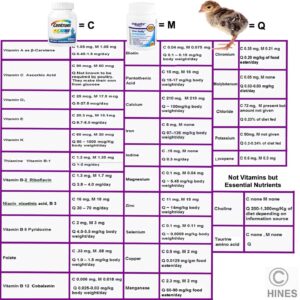 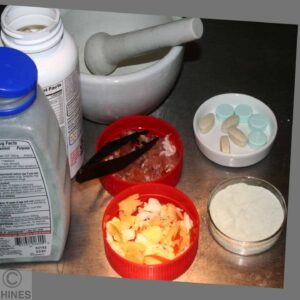 Can I Make My Own Vitamin Mineral Supplement?

Many years ago – before the advent of companies like Mazuri or zoo nutritionists – it was common for zoos to go to their corner drugstore, buy a bottle of Centrum™, calculate an animal’s weight and give it a proportional amount of a Centrum™ vitamin tablet(s) hidden in its diet. The general Centrum formula has been on the market since the 1950s, first by Lederle Labs, then by Wyeth Labs, then by Pfizer, and now by Glaxo. I prepared the diagram above to compare the current Centrum Men’s content to that of a generic look-alike, Walmart’s’ Equate Men’s as well as to what we know about the vitamin and mineral needs of domestic poultry in their first 7 days. 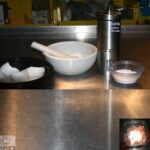 At one time, I mixed one crushed and powdered vitamin tablet with one 1,000 mg calcium carbonate tablet (generic Tums™). But I found that birds of prey objected to the flavor. So more recently I simply grind eggshells into a very fine powder in a coffee grinder and add that to the diets as seen above.

I prefer to begin compounding with products marketed for humans. If a niche veterinary supplement you buy off the shelf lacks effectiveness, contains an ingredient miscalculation or some unexpected toxicity, few wildlife rehabilitators are likely to ever know. But if a national brand of human vitamins or calcium supplement has one of the same defects and 5 million people get a tummy ache, all of us are likely to know.

I began experimenting with added vitamins because I knew that many rehabilitators of wild birds occasional encounter young, fast-growing birds that develop leg weakness. Leg and foot weakness in birds is a common problem. It goes by many names, “curly or curled toe paralysis” “splay leg”, “swimmers”, etc., When it occurs in the poultry industry is call perosis. In poultry chicks it symptoms are leg or foot weakness, twisted or splayed hock joints and “slipped leg tendons” it is also referred to as chondrodystrophy or tenosynovitis. Visually similar problems can be due to improper flooring.  ( read here )  The problem has been blamed on the lack of many factors. Deficiencies in one or more of the B complex of vitamins is often suspected – particularly thiamine and riboflavin. Unlike the fat soluble vitamins A, E (tocopherols) & D3 that the body can store,  B vitamins must be provided daily. High quality meat is a good source of B vitamins. However most wildlife rehabilitators rely on the B vitamins in cat or dog food to furnish adequate amounts. That might not always be the case. The baking process destroys much of the B vitamins present – particularly Thiamine (aka vitamin B-1). Thiamine loss during petfood manufacture can exceed 90%. So the petfood companies fortify their products with industrially-synthesized thiamine mononitrate.  (ask me for Molnar2017) It appears that any nutrient or vitamin deficiency that slows the normal development of cartilage in young growing birds is responsible. ( ask me for Wise1973 ) 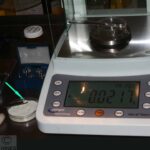 How Much Of This Mix Would I Give?

In the photo above, the green arrow points to the approximate amount of the vitamin/calcium mix that a 61.6 gram nighthawk received during today. The same amount was on the analytical balance in the photo, but it is too deep within the spoon for you to see. That registered as 0.0217 grams or 21.7 mg. That comes out close to 3.5 mg of the powdered mixture per ten grams of bird. Now that is just a ball park number for your reference. In truth, I lightly touch small strips of chicken thigh meat to the powder in the petri dish and the amount that clings to the meat is what the bird receives.

I added Choline to my vitamin chart. Although choline is not a presently considered a vitamin or essential nutrient and most birds and mammals are believed to be able to synthesize choline within their bodies it is thought that deficiencies occur when the body can not keep up with its choline requirements. ( read here ) Chicks are known to require a lot of choline due to their fast growth. Sometimes their need for the compound exceeds their ability to synthesize it. Food tables show that whole eggs are the food highest in choline – approximately 3 time the amount found in meat, 4 times the amount in grain, and ten times the amount in fruits and vegetables. That is why I suggest you add some chopped hard boiled egg to your songbird rations. One of the symptoms of a choline deficiency in domestic poultry is hock joint deformities. No studies have ever been performed in wild birds.

In poultry these leg problems can also be complicated by a common reovirus or mycoplasma infection. ( ask me for VanDerGeude2000 )  But even in those cases, choline appeared to be protective. And regarding that reovirus; a study of wild birds in Poland found that 30% of 192 birds sampled carried strains of the reovirus. Read about that here.

I also added taurine to my required vitamin list. The amino acid taurine is not a vitamin. But it can be an essential nutrient. That was first recognized in cats. The lack of adequate amounts of the amino acid taurine has also be implicated in avian leg weakness. Most taurine is destroyed in the petfood manufacturing process and the mechanically deboned meat used to produce dog and cat food is particularly low on taurine to begin with – probably due to the fact that the meat was of low quality  to begin with.

A particularly good source of natural taurine are raw turkey and chicken leg meat. Poultry breast meat has considerably less taurine. The primary chicken meat in cat food is usually derived from slaughterhouse processing waste and processed carcass bone. That too is quite low in B vitamins including thiamine. So I began adding small strips of chicken thigh meat to my songbird diets. At the same time, I added chopped hard boiled egg whites along with Purina Friskie’s canned Shreds, grubs, flies and mealworms. I have not encountered any leg weakness since those changes were made, but I cannot tell which change is responsible for that or indeed if any of the three changes were responsible. No one has studied the dietary needs for taurine in songbirds or wildlife. Carnivorous avian and mammalian animals are unlikely to be deficient in it unless they are consuming fish containing thiaminase. Traditionally, it was thought that taurine was not an essential dietary nutrient for poultry because they are known to be capable of synthesizing it when the proper meat-derived precursors are present in their diet. But more recently it was found that grain-based diets are often deficient in those precursors and that rapid growth or stress can require that extra taurine be provided. For more information on taurine, ask me for Surai2020 & Campbell1989 .

Will Any Brand Of Human Multivitamin Do?

My first attempt was using Centrum® vitamin tablets that I myself take. Crushed into a fine powder and mixed 50:50 with the calcium carbonate, my assistants, a tropical kingbird and nighthawk, immediately spit it out along with the grub I had dipped in the powder. I tasted the powder myself. It had an unpleasant, salty, metallic taste. The tablets that formed the power had an outer coating that hid that flavor. But once crushed, the bad taste was obvious. On the Centrum label, the second ingredient by quantity was potassium chloride (KCl). Potassium chloride’s main use is as a salt substitute in low-sodium products where other flavors mask its taste. I assume it is some sort of binder in the manufacturing process. So I wandered the vitamin isle checking other brands. Every one of the large number of Centrum products contained KCl as the second largest ingredient. Walmart’s 200 count Men’s 50+ tablets contained KCl in the same 2nd position. However the 65 count Equate™ bottles contained no KCl. When I purchased and crushed those, I found the taste of the final mixture was pleasant. The kingbird and tropical nighthawk ate grubs coated with that powder readily. 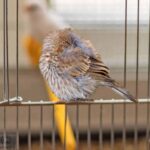 To Read About The Function Of Necessary Vitamins Go Here?