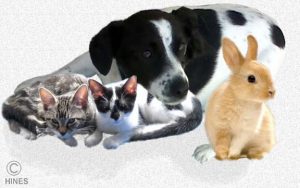 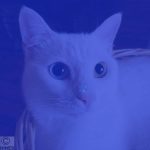 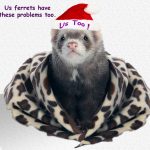 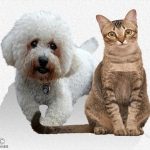 Other causes of hair loss 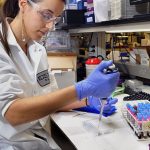 What Is Ringworm? Is It A Worm?

Ringworm is not a worm – it is a fungus. It was common in the 1700 and 1800s  among the poor and crowded residents of London. Barbers of the time spread it. It was itchy – especially at its outer border. And after scratching, people of the time equated its redden circular border with a worm – hence its name. It wasn’t until ~1843 that David Gruby discovered that it was actually a fungus.  The medical term for these fungi are dermatophytes (the infection = dermatophytosis). When your dog or cat catches this infection, it often assumes a ring-shaped, scaly area with a reddened border on your pet’s skin. With time, the center of the area often becomes dry, and scaly. There are three major fungal organisms that can cause it, Microsporum canis, Microsporum gypseum, and Trichophyton. In cats and dogs microsporum canis is the most common. Despite it being named canis, it is considerably more common among cats than dogs. In humans these and other ringworm fungi produce tinea capitis.

What Animals Can Catch Ringworm?

As far as we know, any mammal can contract ringworm – including you and I. Veterinarians in general practice diagnose ringworm most frequently in cats, but it is also commonly seen in rabbits, dogs (particularly immature dogs), chinchilla and hedgehogs. All animals, unless they are immunosuppressed, eventually become immune to ringworm and do not show further signs of the disease. That recovery often takes several months. Unfortunately, some of those pets will remain silent carriers of the fungus with the ability to pass it on to other pets – or their owners. 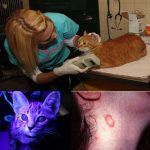 Cats – especially long haired cats and cattery cats – often develop multiple ringworm sites on their bodies. I see it most often in recently purchased or adopted kittens – particularly those that have been under stress, or housed in large poorly maintained colonies. Cats that recover from ringworm often remain carriers of the fungus with no visible external signs. Because the fungus can transfer to humans, it is best to wear gloves when treating ringworm or playing with a possibly-infected pet. I turn off the exam room lights and scan all new puppies and kittens for ringworm with an ultraviolet lamp on their first visit to my animal hospital.  The majority of Microsporum canis infections show glowing hairs around their borders when exposed to ultraviolet light. Not all do. Serum, scurf and debris fluoresce under UV light as well. That can be ignored.

When dogs become infected with ringworm the fungus-infected areas tend to be moister, crustier and more inflamed (folliculitis) than in cats. We do not know if that is because the fungus developed differently in dogs than in cats of a dog’s immune system responds to that infection differently. Most veterinarians report seeing more cases in small and toy breeds. Among those breeds, Yorkshire terriers, Pekingese and Jack Russells lead the pack. Again, we do not know why. Dogs with fleas are more likely to have multiple infected areas – probably because fungus spores on their claws spread the infection. Toenails always need to be checked for fluorescence under UV light.  Because the reaction in dogs is greater than it is in cats, secondary bacterial invaders are common (often  staphylococcus). Serum crusts also glow. One must be careful to not mistake the glow of crusts and scale for evidence of the fungus’ presence. Only glowing hairs are of significance. The head, face, ears, paws and tail are prime areas for the fungus to get started. The trunk is a considerably less common location for initial ringworm lesions.  Visible ringworm infections are considerably more common in younger dogs. As in cats, Microsporum canis is the most common fungus species to be isolated.

How Would My Pet Catch The  Ringworm Fungus?

Ringworm fungus does not penetrate healthy skin. To establish itself, the fungus spores must pass into a fresh scrape or scratch on the same or a different animal. That could be a scratch from another pet, a light scrape caused by normal grooming or scratching, one produced by worrying a bothersome ear, the encounter of a sharp object such as a thorn that later became  contaminated with fungus spores or your pet scratching itself due to fleas. The usual source of the spores is a carrier pet that showed no signs of the disease although contaminated environments, objects and pet carriers could conceivably have spread the disease. Whether fleas jumping from one pet to another can spread ringworm is unknown. Not all pets in a household that are exposed to ringworm fungus will develop the disease. Some pets probably never become infected while others do become infected but develop no overt (visible) signs of the disease. Some go on to become silent carriers that spread the disease to others. How long that situation might persist is unknown. Another common method of transmission is thought to be contaminated grooming supplies and electric hair clippers. The vast majority of dogs and cats that become infected with ringworm eventually cure themselves or become lesion-free even if left untreated. Their bodies become immune or semi-immune to the fungus. However some cases are persistent and do need medical treatment. Veterinarians also treat all cases they encounter because they are a public health concern – a threat to other pets and  you, unsightly and can take months to heal on their own. Fungus lesions can also occur on sensitive areas like the eyelids. Although unconfirmed, many veterinarians and public health officials also believe that treated pets are less likely to laps into silent, long-term carriers of the fungus.

How Will My Veterinarian Diagnose Ringworm In My Pet?

Some cases of ringworm are so classical in appearance that diagnosis is quite easy and does not require growing the fungus in a laboratory or ordering a PCR test. Veterinarians keep a small portable ultraviolet light called a Wood’s Lamp or black light in their offices. It is similar to the black lights you see in disco clubs and bug zappers. In a darkened room, about 70-80 % of ringworm infections will glow under these lamps. The test is not infallible, dried skin crusts, weepy wounds caused by mange mites will also glow. But when the typical fluorescent stippling is confined or includes the pet’s hair shafts themselves, the problem is almost certainly ringworm. Veterinarians learn to recognize those subtle differences through experience. We were taught that in cases where the hair shafts do not glow, one can sometimes visualize the fungal ringworm filaments when KOH-cleared individual hairs were examined under a microscope. I was never successful in doing that and don’t know of anyone was was. So veterinarians pluck a few suspicious hairs from the area and send them off to a laboratory. There, those hairs are placed on a special growing material (sabouraud’s agar). On that Jello-like material, the fungus will slowly grow. So it could take three to four weeks before the results are returned. Now laboratories offer PCR test that returns results much quicker. The only disadvantage of the PCR test is that it cannot distinguish between living and dead ringworm fungus. So it is of little value in evaluating if the medications you are giving are in the process of curing your pet. Only a negative sabouraud’s agar test can do that.

How Is Ringworm Successfully Treated?

Infected pets should first be separated from those that show no evidence of ringworm. I like to clip the area of the infection and then vigorously scrub it frequently with “tame” iodine (povone iodine, Povidine®, Betadine®) scrub (do not use tincture of iodine). Iodine scrub kills fungus (fungicidal) and also removes much of the infected skin flakes that spread the disease. Of course, clipper blades need to be thoroughly disinfected between use.The most common topical treatments to cure ringworm are lime sulfur, enilconazole or miconazole/chlorhexidine shampoos. They work equally well on dogs and cats. Do not apply them near your pet’s eyes. Although you could first apply protective eye drops, infected areas near the eyes are best treated at your local animal hospital. For isolated small spot elsewhere, three medications, over-the-counter terbinafine (Lamisil® cream), clotrimazole (Lotrimin®) and miconazole ointments are often effective. When the areas are not being pre-cleaned sufficiently with a medicinal scrub, these medications are unlikely to work as well. Since ringworm areas usually disappear over time, it is hard to scientifically judge the effectiveness of all these treatments. At the least, they will lessen the number of infective spores that allow the fungus to spread.

Vacuum your house and scrub down kennels to remove as many fungal spores as possible. Think of them as seeds. Throw away the vacuum cleaner bag once you are done. Be sure to wear gloves when you treat or handle infected pets so you don’t become infected yourself or spread it to other pets. Disinfect grooming aids and pet bedding between use. Animal hospital staff, including me, have become immune to ringworm over the years. If you are fearful of catching it, leave treatment to someone who works day in and day out with dogs and cats. They are likely to already be immune. Shearing a dog or long haired cat makes them considerably easier to treat.

Itraconazole (Sporanox®) and oral terbinafine are the most common oral medications given to pets to eliminate ringworm. An older oral medication. Griseofulvin (Fulvicin®) , will also kill ringworm. But it must be given for an extended period of time (4-8 weeks) and side effects can be more common that when itraconazole or terbinafine are used. Griseofulvin must never be given to pregnant animals or people. I would not even handle the tablets if I was of childbearing age. Cats with concurrent immunodeficiency disease (FIV) or feline leukemia (FLV) might not tolerate some of these medications and, due to their weakened immune systems, could relapse with the fungus later.

Nobivac™, a division of Merck Animal Health, and their predecessors marketed a ringworm vaccine for many years. In their desperation to rid their catteries of a recurrent ringworm problem, some catteries and cattery vets administered the vaccine. But Cornell University veterinary school later found that it was ineffective in cats.

Kittens, puppies and other pets least likely to harbor this disease come from individual litters born in a residential settings. That is, the more cats, dogs or other animals at an institutional or commercial facility or home, the more likely ringworm is to be present among them. Do not share grooming aids, clippers, bedding, cages, etc. between pets. Ask your groomer how he/she disinfects clippers and scissors between use. The best clipper bland and scissor disinfectant is one that contains benzalkonium chloride. Be sure the grooming equipment is completely dry before use and never intentionally use benzalkonium or other quaternary ammonium compounds to treat ringworm.  For catteries and kennels, bleaching is sufficient. Bleach kills fungi , bacteria and parasite eggs best when grime and dirt are removed before the bleach is applied. Of course, animals need to be removed from the area until the smell of bleach has completely dissipated.