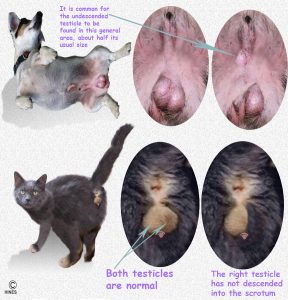 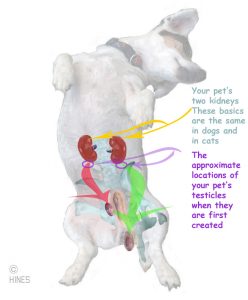 Cryptorchidism is a condition in which one or both testicles of your dog or cat fail to descend into its scrotum. It is a relatively common problem in dogs and cats and along with umbilical (belly button) closure issues  are the most common birth defects that veterinarians encounter. It is seen more commonly in purebred than random-bred (crossbred) pets. I see about three dogs with this problem for every cat. That is probably because so many ordinary family cats in the United States have a rich genetic pool. Inbreeding concentrates the bad as well as the good traits. Miniature schnauzers, cocker spaniels, chihuahuas and Persian cats have more than their fair share of cryptorchidism, but any breed or random-bred pet has the potential to be affected.

Dog and cats in which both testicles fail to complete their normal journey from inside the abdomen to the pet’s scrotum are usually sterile. When testicles remain in a dog or cat’s abdomen, the 4-5 F degree higher temperature there usually prevents the production of viable (functional) sperm. The higher temperature does not, however, affect the testicle(s) production of the hormone, testosterone. So these pets exhibit typical male behavior. When only one of your dog or cat’s testicles does not descend into its scrotum your pet should still be fertile. When two missing testicle are under the skin near the scrotum, your pet might still be fertile. But it is a very bad idea to breed dogs and cats that have any degree of cryptorchidism because their descendants all have the potential to carry the same defective genes.

Cryptorchid dogs and cats do have a higher rate of developing a certain hormone-secreting cancer call sertoli cell tumor. The sertoli cells, are located within your pet’s testicles. They provide nourishment to the dog or cat’s sperm cells. Sertoli cells also produce feminizing hormones (estrogens). The higher body temperature within retained testicles is thought to be the reason sertoli cell tumors form in cryptorchid dogs and cats and humans. When these tumors do exist they often cause thin skin, sparse hair coat, aplastic anemia, enlarged breasts and sexual attractiveness to other male dogs. The hair loss in these cases is very specific in that it is identical on both sides of your pet’s body (bilaterally symmetrical). You veterinarian might need to do ultrasound examinations of the retained testicle as well as a plasma estrogen level assay to confirm a sertoli cell tumor diagnosis.

Ten to twenty percent of these tumors are said to be malignant. Therefore they could metastasize (move) to other parts of the pet’s body. If the tumor has spread it can usually be treated successfully with chemotherapy. To avoid this debilitating treatment, your veterinarian will probably suggest that your pet’s cryptorchid testicle be located and removed before it has an opportunity to become cancerous. I let a dog or cat’s body fully mature before depriving it of the important androgens that testicles produce. Sertoli cell issues form over extended periods of time; so they are not an immediate issue.

Another problem that is much rarer but potentially could occur in cryptorchid pets is a torsion (twisting) of the spermatic cord , the sperm duct that is attached to each testicle. Should that happen, the retained testicle looses its blood supply and becomes devitalized. I have never seen a case, but they have been reported.

What Are The Signs I Might See If My Dog Or Cat Is Cryptorchid?

Cryptorchidism in dogs over twelve weeks of age is easy to see if the scrotal area of your pet is examined. It is a bit harder to detect in cats this young. An experienced person needs only pass the scrotum through pinched fingers to notice that only one or none of the testicles are present. The younger the pet, the smaller the testicles will be; so examination of small puppies and kittens has to be thorough and performed by an experienced individual.

In more than half of the cases, veterinarians can palpate (locate with their fingers) the missing testicle just forward of the scrotum or in the fat located in the animal’s groin. In these case, testicles have been relocated into the scrotum. Sometimes testosterone therapy is said to allow the retained testicle to descend fully into the scrotum when it is not quite there. Other veterinarians administer injections of chorionic gonadotropin (HCG) in an attempt to encourage the testicle(s) to descend. In humans, HCG injections are said to assist testicular descent 15-20% of the time. (read here) I do not feel that any of those procedures should ever be done in pets. Doing so, or breeding your cryptorchid dog or cat, perpetuates the disease in future generations of dogs and cats. Instead, have your pet neutered so that both testicles are removed and it can not pass this defective trait on to future generations. If you did not intend to neuter your pet, have the undescended testicle removed to preserve your pet’s future health. Living with a sexually intact male cat is a challenge. But not every male dog needs to be neutered and none of them need to be neutered before they are sexually mature. You can read my thought on that here.

A special problem comes up when an adult dog or cat of either sex appears to be castrated or spayed but still exhibits male or female sexual behavior. In those instances, veterinarians can be uncertain if they are dealing with a castrated male cat or dog with other health issues, a cryptorchid pet whose undescended testicle was not located and removed, or a pet with a hormone imbalance of some other kind. In those cases, more tests will need to be run. Sometimes the retained testicle can be visualized in the abdomen through ultrasound. When this is not the case, pet can be given an injection of chorionic gonadotropin. If this hormone causes a rise in serum testosterone level one hour after injection, we are most likely dealing with a cryptorchid pet. When this question occurs in a cat, we can examine the penis for spines. Penile spines are much smaller in castrated male cats than in cats that still have one or more hidden cryptorchid testicles.

In those cases, your veterinarian must, in effect, neuter and “spay” the same animal. The missing testicle can be anywhere between the rear (posterior) pole of the kidney and the inguinal ring and it can be nerve-racking to find and remove it – particularly if your pet is overweight. These testicles are much smaller and softer than the descended ones and are extremely difficult to locate in the fat that occupies the posterior abdominal (retroperitoneal) space. What usually allows me to find them is the epididymis or sperm collecting tubules that retain their distinctive appearance and “bumpy” feel through my gloves.

Dogs and cats that are cryptorchid have a slightly higher incidence of other genetic defects such as inguinal and umbilical hernias, abnormally formed penises and sheaths, as well as patellar luxations (trick knees). You can read more about some of the much more serious birth defects that occasionally occur in dogs and cats here.

Some authorities suggest waiting up to six months before deciding that the testicle(s) are not going to descend. I have never seen a case where the testicle(s) were not descended at twelve weeks of age but descended later. Late descent, during the first year of life, is common in humans – but humans stand erect and gravity probably helps move human testicles down.