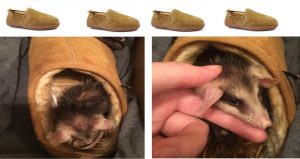 Back to raising opossums

Before you interact with a wild opossum, you need to know that all urban opossums that come to me – from the time they develop fur – have fleas. You also need to understand that those fleas can be quite dangerous to you. The first thing I do, before they enter my animal hospital or rehab center, is pick off those fleas – one by one – with tweezers. As I go, I drop them into a glass of rubbing alcohol or vodka (Why vodka ? I always have some vodka around the hospital to deal with antifreeze poisoning). When I have them all, I flush them down the toilet.

Whatever towels, straw, etc. and the box they arrived in get bagged, sealed and put in the outside trash bin. I used to do that so as not to introduce pesky fleas. Left on the animal, fleas multiply in the cage bedding and eventually drain the youngsters of blood. But there is a much more important reason to do it now – the threat of a serious disease called Murine Typhus. You can read an article about that disease as it is now occurring in Texas here. In California, here. In Mexico, here. You can read the symptoms you might experience if you were bitten by one of these fleas (headache, fever, perhaps muscle and joint pain and later, a distinctive rash) here.

On the lighter side, as you can see, opossums come to me in all sorts of interesting containers. 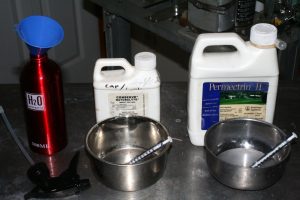 The EPA enforces FIFRA in the USA. It is a potential crime to use a product for purposes and animals not mentioned on the label. Of course, none mention anything about opossums. But just before I released it, the possum that arrived in the shoe told me that in discussions with other opossums, he had learned that a 0.5% spinosad emulsion (such as CONSERVE® – NATURALYTE) mixed 0.5ml in 28 ml of tap water or a 10% permethrin (such as Permectrin II®) emulsifiable concentrate dairy premises spray mixed 0. 14 ml in 28 ml of tap water which they swabbed on themselves and their furry babies with a pledget of cotton (while always wearing very small nitrile gloves) was fine for eliminating fleas on baby opossums. They were always careful not to let the slightly-damp babies chill. Of course, I can’t vouch for any of that – just his word for it.