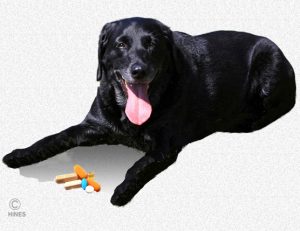 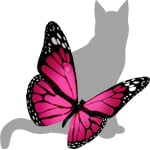 Dogs and cats that are taking corticosteroid medications like prednisone, prednisolone, dexamethasone or triamcinolone for other health issues can have falsely low thyroid tests.
The same thing goes for cats and dogs whose adrenal glands produce too much of their own corticosteroids (Cushing’s Disease). Thyroid tests usually return to normal when those medications are discontinued or an adrenal gland problem is addressed.

Phenobarbital is a drug that is given to control seizures. It can also be responsible for falsely low thyroid tests. So can the use of another medication for seizure control – zonisamide.  Also, some of the side effects of phenobarbital – weight gain, high cholesterol, drowsiness and memory problems – might be mistaken for signs of a thyroid gland problem. Thyroid tests should gradually return to normal if the medication dose can be lowered or another medication used instead. Sometimes, the phenobarbital dose can be reduced by the addition of potassium bromide, or levetiracetam.

Certain antibiotics, those containing trimethoprim and a sulfa (e.g. SMZ/TMP, Tribrissen®, Bactrim®, potentiated sulfonamides, Proloprim/Trimpex®, etc.) can also cause low thyroid gland test reading. Levels should gradually return to normal when any of those medications are discontinues. When that cannot be done, there are complex tests that can often identify these medications as the source of low thyroid test readings. (read here)

Medicines Given For Arthritis (NSAIDs)

Older dogs are commonly given NSAID medications long term to deal with the pain and lameness of their arthritis. (read here) Those drugs include everything from aspirin (never recommended) to the newer veterinary-approved products. Some studies found that NSAIDs can lower the level of thyroid hormones. That could incorrectly indicate that a dog had a thyroid gland issue. The results of research on that has been mixed. (read here)

So if your dog is taking any of those medications regularly and its thyroid function tests indicate it is low-thyroid, it might be wise to repeat its T-4 test when the pet had been off of NSAIDs for a month or so.

Mirtazapine (Remeron®) is also a behavior-modifying drug. It is often given to pets, (cats and occasionally dogs) as an appetite stimulant or in an attempt to treat behavioral disorders. In humans, long-term treatment with mirtazapine increases T3 levels and decreases F-T4 levels (read here), but I cannot tell you what the drug might do to thyroid test results in your dog or cat. If you have experience with that let me know.

Remember, when the levels of T3 and T4 produced by your pet’s thyroid gland go down, their levels of thyroid stimulating hormone (TSH), produced by their pituitary gland in response, tends to go up and vice versa.