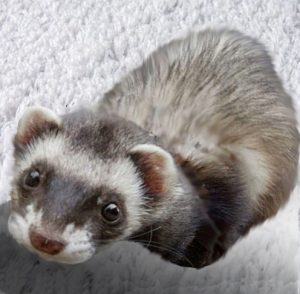 I don’t need to tell you much about the flu. You know what influenza it is and what it does to you. There are an enormous number of influenza viruses in the animal kingdom. Most animals that naturally live in herds and flocks have a flu virus strain (clade) that is adapted to thrive in their particular bodies. But domestic and wild ferrets are not one of them. They lead mostly solitary lives in the wild – too greatly dispersed for such a virus to move from ferret to ferret. I know of no reports of influenza occurring in wild ferrets.

For reasons unknown to us, human-adapted strains of influenza thrive in ferrets and guinea pigs too. When they get infected with human strains of the influenza virus, they develop symptoms quite similar to ours. The advantage of the influenza virus over many other viruses is that it is constantly changing its surface proteins in ways that defeat the antibodies produced by infections of prior year strains (antigenic drift). That is why people (and ferrets) can catch influenza again and again. Another major advantage for the influenza virus is that flu viruses that have adapted to live in one species can jump to a new species rather easily when two or more different species are crowded together. Those new flu viruses are often so novel that they are considerably more dangerous than a typical year’s flu virus that only has minor year-to-year surface protein changes. That is called an  antigenic shift.

Is Influenza A Common Health Risk To My Ferret?

Among the potential health risks to your ferret, influenza is very far down my list of concerns. But concern rises in less-than-optimum ferret environments: pet stores, ferret rescue centers, ferret breeders, high school biology class mascots, ferret hoarders, nature centers, zoos etc. (ref)  The more people and ferrets your ferret is exposed to, the more likely it is to contract the human influenza viruses. That is through today. There is no guarantee that influenza might not mutate in the future into a more likely ferret threat.

We know a lot about influenza in ferrets because ferrets and guinea pigs are used by scientists to study the virus and to judge the effectiveness of the human flu vaccines they invent.

Influenza virus is not very stable in the environment. In one study contagious virus were no longer present on most non-porous metal and plastic surfaces, (such as aluminum and computer keyboards) after 8 hours. On porous items like soft toys, clothes and wooden surfaces, contagious viruses were not present after four hours. Bright sunlight hastens the destruction of most virus including influenza. (ref) Other studies have found that different influenza virus strains persist in the environment longer than others. But most of the studies that found flu virus persisting longer did not check to see if the virus present were still infective.

The way most ferrets catch the flu is through inhaling the coughs and sneezes (aerosol droplets) of a nearby ferret or their infected owners. In those situations, the rate of transmission range from 33-75% – somewhat higher than for us humans (ref1, ref2)

Again, the strain of influenza influences its infectiousness too. ( ref1,ref2)

If My Ferret Should Catch The Flu What Signs Might I See?

Many ferrets that are experimentally given the flu show only mild symptoms or none at all. (ref)

The first signs of influenza infection in ferrets are often quite vague – a little less activity and interest in their surrounding, a decreased appetite, more yawning. Those symptoms can begin in as little as 48-72 hours after exposure to the influenza virus. ( read here , ref2, ref3)

Should signs like those occur in your ferret, they are quite similar to the early signs of canine distemper – perhaps a cough and some sneezing, less activity and appetite. Canine distemper is a much more serious disease in ferrets than is the flu. You can read about distemper in ferrets here. When the canine distemper virus attacks ferrets, serious pneumonia almost always occurs and permanent neurological damage is very likely down the road. But almost all ferrets that were in good health when exposed to the influenza viruses of today and the past return to good health after a short mild illness.

When their rectal temperature is checked, some ferrets in the early stages of influenza run fevers (104-105F = 40-40.6C). A healthy ferret’s rectal temperature (taken while relaxed and in a cool environment) is rarely over 102.5 F/39.2C. A ferret’s body temperature is often about a Fahrenheit degree higher in veterinary hospital settings or after excitement and exertion. Farther along in an influenza infection, fever is usually absent. In one controlled study body temp peaked about day 3 after infection and returned to near normal by day 5. (rptref)

Most ferret owners do not become concerned enough to bring their ferret to an animal hospital until the pet begins coughing and sneezing. At that time, discharges from the nose, nasal crusting and sebum accumulation at the inner corners of the eyes are common. It is also quite common for those pets to be dehydrated.

A case of influenza in ferrets generally lasts 7-14 days. However elderly ferrets, stressed ferrets, ferrets on nutritionally deficient diets and ferrets with coexisting health issues can go on to develop secondary bacterial pneumonia. Those ferrets open mouth breath with rapid and deep respirations. They have little to no interest in food and loose weight. Dehydration and the sunken eyes that accompany it are a major cause of mattering (gunk) at the corner of their eye.

Can My Ferret Catch The Flu More Than Once?

Ferrets can catch the flu as often as you can. Like you, they will probably never catch the same flu virus version twice because specific virus strain antibodies are persistent in their bodies or will be rapidly constructed by their immune system. (ref)  It’s just that those antibodies don’t protect against newer versions of the flu virus that you can count on to appear every winter flu season.

Can My Ferret Be Vaccinated Against The Flu?

Ferrets are commonly vaccinated against influenza during the production of new human flu vaccines. That is done to be sure the new vaccines are safe and efficacious. (ref)

Both intranasal and intramuscular vaccines protect ferrets after about a week. Vaccinated ferrets may still show mild symptoms when later exposed to wild (virulent) virus, but those symptoms quickly pass. (ref) If you or members of your family think you might have the flu, isolate your ferret from exposure as best you can. Influenza might not be the only human respiratory virus that can be transmits to ferrets. (ref)

What Tests Can My Veterinarian Run To Determine If This Is Really A Case Of Influenza?

Mild cases can be quite hard to diagnose with certainty during a routine veterinary office call. The likelihood of it being influenza greatly increases when human family members also have the flu. That’s probably a question your veterinarian is going to ask.

Some ferrets with an influenza infection might be mildly anemic. Increased ALT , AP and low blood protein potassium and chloride have also been reported. (ref)  However that reported ferret flu outbreak occurred in a Pennsylvania pet store – so the resulting laboratory finding I just mentioned might have had little or nothing to do with the flu virus. Pet stores are never salubrious (healthy for their inhabitants).

In severe cases where secondary bacterial pneumonia has had time to develop, x-rays would indicate lung involvement. Tonsillitis might also be present.

The only definitive test your veterinarian might have at his/her disposal would be a nasal/pharyngeal swab/washing sent to a diagnostic laboratory capable and willing to running one of many commercial real-time PCR or immunohistochemical tests that identify the flu virus. Some of these tests yield results in as little as 15 minutes. (ref)

A query of your state or local public health department or your nearest veterinary school would probably be the best way to locate such a laboratory. (ref)

How Might My Veterinarian And I Care For A Ferret With The Flu?

As with humans, influenza tends to be more sever in very young and very old ferrets. We know more about its occurrence in ferret kits (babies) and younger breeding stock because ferret ranches where epidemics are more likely to occur don’t house old ferrets. Those and other facilities where large numbers of ferrets reside at close quarters are ideal for virus spread. The severity of influenza in ferrets is also very dependent on the influenza strain involved. Some influenza virus strains are considerably more dangerous (=virulent=pathogenic) to ferrets than others. (ref)

TLC and supportive care gets the majority of ferrets through an influenza problem. That includes combating dehydration by coaxing your ferret to drink (very important). Providing tempting soups and broths also increases your ferret’s fluid consumption. Your veterinarian can administer subcutaneous or intravenous fluids should your ferret be reluctant to consume enough oral liquids on its own. Purina recently introduced a new product to encourage cats to drink enough water. It is called Hydra Care™

. Let me know if you have experience offering it to your ferret.

Keep track of your ferret’s temperature. Elevated temperature after the third or fourth day of illness could be a sign of secondary bacterial pneumonia. Many veterinarians will place sick ferrets on systemic antibiotics knowing full well that antibiotics do not kill virus. They do that to prevent those secondary bacterial pneumonias from occurring. Adjust the temperature of your ferret’s environment based on its body temperature. Antibiotics are best given by injection when ferrets are hesitant to swallow. I much prefer giving oral liquids to pills. Pills can become lodged in a ferret’s esophagus – especially when it is weak and dehydrated. Pills can always be pulverized and turned into a liquid. Be sure to shake any such compounded medication well because those custom products tend to settle to the bottom. Ferrets do taste natural sugar sweeteners (but not artificial sweeteners) that might be used to mask bitter flavors. But I generally mix medications with refrigerated, liquefied meat pâtés. Even then, sick ferrets often have to be forcibly rolled in a towel and hand fed small quantities over considerable time until the proper dose is in them.

Coax your ferret to eat if you can. Recovery diets sold for cats or homemade chicken or lamb-based diets are best. I find that they are better accepted when the food has been warmed. Feed these diets quite moist or in a slurry because tonsillitis may make dry diets hard to swallow. Hand-feed your sick ferret in small portions given throughout the day. A scale to keep track of any weight loss is also desirable. It is important that a nutritionally balanced diet be fed to your ferret long-term. But during a short period of convalescence, acceptance is more important than a nutritional balanced diet that is rejected. Entyce® might be helpful. If you have given it to your ferret let me know.

Most veterinarians would probably just give your ferret a broad spectrum antibiotic cover to minimize the likelihood of secondary bacterial pneumonia. But antiviral drugs, like Tamiflu® (oseltamivir), appears to be as effective in ferrets as it is in humans when the medication is given to ferrets up to 4 hours after their exposure to the influenza virus. It is less effective the following day. (ref)  Others have reported that Tamiflu® is more effective against some influenza strains in ferrets than others. (ref1, ref2) When Tamiflu is given to a ferret with influenza, the effective dose is considerably higher than what we humans receive (ref).

Influenza virus can pass both ways, from you to your ferret or from your ferret to you. When a ferret catches the flu it is not only its lungs and upper airways that can be affected. Some flu strains affect its entire body (ref)