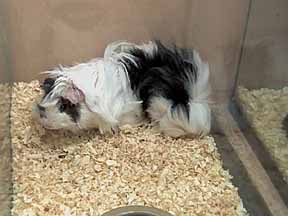 Most readers find this article because they have noticed that their pet guinea pig is getting awfully plump in its abdomen. It is hard for owners – and pet store employees to tell young male guinea pigs from young female guinea pigs. So the two you thought were the same sex may not have been. Also, guinea pigs are unique in the early age at which they can become pregnant. So many were already pregnant when you obtained them.

Will My Pet Guinea Pig Have Delivery Problems?

The great majority of guinea pigs in this situation go on and have normal, healthy babies. So try not to worry – the diseases I mention will probably not occur. Just follow some of my suggestions on prenatal care. If your guinea pig is older, read over the problems more carefully. In either case, get the name of a veterinarian in your area who specializes in “pocket pets”. You will probably not need him/her, but it is good to know where to turn in an emergency if you do.

What Are Some Important Factors In A Successful Guinea Pig Pregnancy:

The most important factor in successfully breeding your momma guinea pig is that it not be too old at the time of its first litter.

The next most important factor is that your guinea pig’s diet be optimal.

The third most important factor is that your guinea pig not be too fat.

The forth most important factor is a comfortable cage or pen and a lack of handling (particularly by children) and stress during her pregnancy.

Most male guinea pigs are good sires. However, male pets, kept in isolation, and those weaned too early sometimes are unaware of the necessary facts of life. Long haired sows should have the hair surrounding their vulva clipped short. They should never be maintained on wire flooring. Besides being a bad husbandry practice, wire floors quickly inflame the toes of heavy pregnant sows.

Pregnant sows almost double in weight. Try not to handle them in late pregnancy. They are so terribly distended and uncomfortable at this stage. Pregnant sows do better when housed individually during the last trimester of pregnancy, But for convenience, many breeders successfully breed them in groups.

Stillbirths and abortions in guinea pigs are most often associated with pregnancy toxemia or ketosis. Ketosis is also a common condition in human beings and cattle. It occurs when the body burns a large amount of fat in response to inadequate levels of blood glucose or accessible liver glycogen.

Two factors are most responsible for this condition in guinea pigs, inadequate feeding during late pregnancy and mothers that were too fat to begin with. There are several factors that can cause guinea pigs to not consume adequate nutrients late in pregnancy and shortly after birth. These are inadequate food portions, infections of the breasts (mastitis), failure of the uterus to adequately cleanse after birth (metritis) and dehydration. Genetic susceptibility of certain strains of guinea pig also contributes to the disease. Pregnancy toxemia or ketosis is most common during a sow’s first or second pregnancy

Signs of the disease appear suddenly and progress rapidly. These guinea pigs stop eating and drinking and quickly becomes dehydrated. Stool may become mucoid or mucus-covered. As the disease progresses she will become weak, develop labored breathing and often die in two to five days. These guinea pigs are hypoglycemic, that is, their blood sugar (glucose) is abnormally low (less than 60 mg/dl). Their normally basic (alkaline) urine becomes more acidic (normal urine pH is 9). Due to a derangement in metabolism during pregnancy their livers produce excess acetoacetic acid, acetone and B-hydroxybutyric acid (Ketone bodies). Proteins and ketones are also spilled into the urine. All this can be quickly detected with urine chemistry check strips and a few drops of urine. There is no consistently effective treatment for this disease so prevention is the key. Avoid obesity as well as stress during pregnancy. Do not breed guinea pigs that are too young or too old.

Be sure that your guinea pigs do not have borderline vitamin C deficiencies. Vitamin C (ascorbic acid) requirement increases during gestation and it is thought that borderline deficiencies in ascorbic acid contribute to a high level of abortions and stillbirths in a colony.

The signs of scurvy in guinea pigs are initially vague (nonspecific). They include, anorexia (lack of appetite), rough hair coat, listlessness, weakness and subcutaneous hemorrhages. Later, joint enlargement and painful joints may occur. Guinea pigs with scurvy often grinding their teeth and are generally sore. They resent handling. Remember vitamin C breaks down rapidly, especially from the effects of heat, moisture and light. So do not keep guinea pig chow for over two months. Green peppers, kale and cabbage are rich in vitamin C. If you are supplementing your water with vitamin C, it must be changed daily since it quickly hydrolyzes. Some breeders give 10 mg vitamin C orally per day during pregnancy. In poorly managed colonies bacterial infections with streptococcus, bordatella and pasteurella can increase the incidence of stillbirths and abortions.

Dystocia or difficult delivery is relatively common in guinea pigs. It is associated with the failure of the pubic symphysis, a joint within the pelvis, to relax fully at parturition (birthing) to allow the baby guinea pigs to pass through the birth canal. It’s chief cause is breeding females older than 7 months for the first time. Other causes are obesity or one or two very large fetuses. Clinical signs that the babies will not pass through the canal are nonspecific. They include depression, failure to eat (anorexia), bloody greenish-brown vaginal discharge and signs of ketosis. If I place my finger through the birth canal and determine that it is wide enough for the babies to pass through, I give these guinea pigs a drug called oxytocin. I give them intramuscular injections of 0.2-3 units/kilogram. Some breeders routinely give pregnant sows 2 units on day 66 of pregnancy. The drug should work within twenty minutes. If necessary, it can be given an additional two times at thirty-minute intervals. One always has to be ready to perform cesarean sections in these cases. This procedure is quite tricky in guinea pigs because they are such bad anesthetic risks.

Lack of milk (agalactia) is also common in guinea pigs. It results from malnutrition, ketosis, dehydration, mastitis or a lack of natural oxytocin. Orphan guinea pigs or those from mothers that lack milk need to be bottle-fed. This is quite easy to do. I generally use KMR kitten milk replacement diluted two or three to one with water. By the second week I supplement this with baby food vegetables. By the third week milk is no longer necessary. Guinea pigs that are less than 55 grams at birth rarely survive. Litters of three or four generally do the best. Be sure that pigs smaller than this are reserved nipple time because larger more vigorous babies often push them aside. And check the milk frequently. Any evidence that the milk is clumped and off-color or that the gland is hard, painful and bluish are evidence of a mammary gland infection (mastitis). These pigs need to be immediately removed from the mother if they and her are to survive. Mastitis due to streptococci is relatively common in guinea pigs.