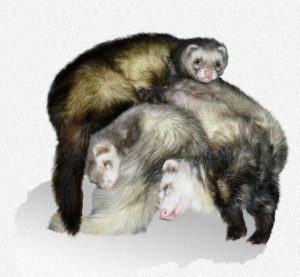 When ferrets reach their mid years they occasionally develop assorted lumps, bumps and scabs in or under their skin.

What Causes These Lumps?

When you have more than one ferret and it has scabs around it’s neck, it is often the result of the pets rough housing.

But when you only have one, these scabs are sometimes due to your ferret scratching its neck and ears.

There are two reasons for this, fleas and ear mites. The scratches are worse if your pet’s toenails are overgrown.

Not every ferret that scratch has ear mites or fleas. Boredom also increases grooming and scratching which can lead to irritated areas. Over-bathing dries the pet’s skin and makes it itch. Diets too low in fat also cause itchy skin. Ferret skin gets thin and easily scratched when they have adrenal gland problems. Lumps can also be a sign of lymph-node cancer in ferrets (lymphosarcoma).

Ferrets get skin cysts when natural glandular secretions become trapped within a skin gland. These are usually a sebaceous glands that normally produces skin oils. Cysts are usually round . They do not cause pain and they can usually move slightly when you push them with your fingers.

They can also form in one of the many musk glands that surround your ferret’s rear end. Even de-scented ferrets have lots of these glands. They are the reason de-scented ferrets still have a musky odor. When the duct of the gland becomes plugged, normally liquid secretions harden and become firm waxy material trapped in the gland. Cysts are always oval in shape and move with the skin. With time they develop a fibrous capsule. They usually get no larger than a pea.

Cysts can rupture, drain, and then reform. They have the same color as the surrounding skin, which helps distinguish them from abscesses. Squeezing them causes no pain.

Cysts become more common as your pet ages. Cysts of this type are not a threat to your ferret’s general health. They only become a problem when they become too large or restrict normal functions or activity. They are easily removed.

A rare form is called a salivary cyst. These are pockets of saliva that form on the sides of the face or under the chin when saliva ducts to the mouth get plugged. They are not a threat to your pet’s health unless they get so large that they interfere with eating. Then they need to be removed.

Abscesses are localized infections that result from vaccinations and puncture wounds. They are filled with pus and are painful. At that stage the pet may have a fever (Temperature over 103F, 39.4C)). Once they begin to drain, they cause no pain. Abscesses that result from vaccination are usually elongated. The most common cause of abscesses are bacteria, but fungi and irritating chemicals can also form them. Antibiotics and drainage the abscess usually are all that are required to cure them. Occasional ferrets will develop draining abscesses next to their anus. This occurs when some of the anal sac tissue was not removed during de-scenting surgery. Hard bumps on the ferret’s jaw are usually due to an infected tooth.

Ferrets that are kept out-of-doors, occasionally develop abscesses surrounding fly grubs called Cuterebra. In America, the fly that causes this problem normally bothers badgers. But it will attack ferrets as well. These abscesses are very distinctive in that they form a little hole through which the grub breaths. They also have an unmistakable odor. They are easily removed by your veterinarian. Do not squeeze them. Bursting the grub can be fatal to the pet.

The bodies of ferrets as well as all other mammals have lymph nodes placed at strategic points on the body just under the skin. Ferrets are more susceptible to lymphatic tumors than many animals. Lymphomas are the second most common tumors in ferrets. These lumps are first seen at the front of the shoulder, under the chin, in the groin, and behind the knee. They are firm and painless and often more than one node is enlarged. They do not move about as freely as abscesses or cysts when you press them. You will find more information on this condition in another  article  of mine on Lymphoma on this web site.

Things other than cancer can also cause a lymph node to enlarge. Infection in the area of the body that the node drains lymph from will cause this.

Skin tumors are rather common in old ferrets. There are many kinds, each with their own name, depending on the type of cell that became cancerous. Some common ones are fibromas and fibrosarcomas (tumors of the connective tissue), adenomas and adenocarcinomas (tumors of skin glands), mast cell tumors, hemangiomas (tumors of blood vessels) and basal cell tumors.

Many of these tumors can be successfully removed by your veterinarian. The earlier they are removed the better. To plan for the surgery and to judge the chances of success, your veterinarian may suggest that the mass be biopsied and the sample sent to a pathologist. Once removed, a sample of the edge of the tumor can again be sent to the pathologist to be sure that all the cancerous cells were removed.

How Is The Underlying Cause Of A Skin Lump Diagnosed?

Some causes can be determined by your veterinarian’s visual examination of your pet.

Sometimes material from the swelling can be stained and examined microscopically in the veterinarian’s office.

Other times, the only way to tell what is causing the lump or skin lesion is to examine the tissue that forms it microscopically. A very small portion of the tissue needs to be removed and send to a veterinary pathologist. This allows tailored treatment of your pet rather than a hit-or-miss approach and makes a cure more likely. Once the pathologist has reported back, your veterinarian might think that other tests, such as blood work, x-rays or ultrasound would be beneficial.