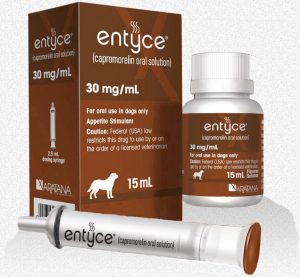 Capromorelin A New Option For Dogs That Won’t Eat 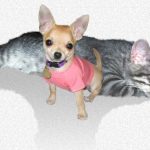 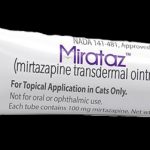 Mirataz® For Cats That Won’t Eat 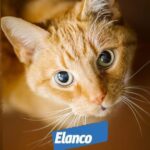 Ghrelin is the natural hormone that stimulates appetite in you, your dog and your cat. The body naturally produces most of it in the walls of the stomach and upper intestine. Ghrelin triggers a lot of other important activities besides appetite. One is the release of growth hormone (GH). In that capacity ghrelin is called a secretagogue. Entyce® (capromorelin) is one of those secretagogues too – an artificial compound that mimics the effects of ghrelin. Both also increase your pet’s intestinal motility. That increases the rate at which food passes through your dog and cat’s intestine. They also inhibit nausea. ( read here ) They have the potential to elevates blood glucose level through their effects on the liver. Ghrelin also has positive effects on heart function and blood pressure, increasing the strength of the heart and decreasing blood pressure. ( read here , here & here) Ghrelin also interplays with various cells of the immune system to enhance their function. ( read here ) In humans, ghrelin even has positive effects on sleep, anxiety and memory. (read here) If Entyce®/capromorelin has those ability too remains unknown.

Growth hormone must be given by injection. In the late 1990s several drug companies hoped that the positive effects of ghrelin could be duplicated by similar bio-engineered drugs like capromorelin/Entyce® that could be given orally. They hoped that such medications might slow the natural muscle loss and debility that comes with human old age. Those research studies on the long term use of drugs like in capromorelin in humans were abandoned because continued use caused high blood sugar levels that might lead to diabetes and obesity. ( read here)

Natural growth hormone (GH) is a large molecule – too large to be absorbed intact through the intestine – so it could not be given orally. Pfizer got to work on that in the early 2000s. They engineered more powerful, smaller and longer lasting molecules (agonists) with certain effects similar to ghrelin (= artificial secretagogues).  Because the molecules were smaller they could be given orally. ( read here & here )

Initial studies on the use of capromorelin in people were promising. (read here )  But Pfizer halted all clinical trials in 2006. The reasons why were not announced, but rumor had it that the weight the volunteers gained was mostly fat, not lean muscle. Other side effects were rumored to also be among the reasons. The last reports of its use in people was in 2015 as a potential laxative. (read here)

It is very difficult to get a drug approved in the United States to combat human aging. That is because the FDA does not consider normal aging to be a disease. So the FDA sets the bar extremely high for approval of such products. ( read here ) There are occasionally documented drops in growth hormone levels that are excessive for a person’s natural age (=GHDdeficiency). Perhaps capromorelin will eventually be approved to treat those cases.

Some of Pfizer’s initial studies of capromorelin were done in laboratory beagles. They jotted down in their notes that the dogs sure ate more after consuming the drug. Soon after, Pfizer’s split-off its veterinary products branch as Zoetis . Apparently Zoetis didn’t want capromorelin either. However, a small player in the veterinary pharmaceutical market, Aratana Therapeutics, ( now part of Elanco) saw a potential veterinary market for capromorelin. They applied for and received an FDA license to market capromorelin as an appetite stimulant for dogs.

Many of the common disease that our dogs develop lead to poor appetite and weight loss. In their FDA filing, Aratana gave that number at 10 million dogs per year. Some of those diseases cause an inevitable downward spiral regardless of your pet’s willingness to eat. But there is little doubt that some dogs would live longer and perhaps even recover if they can just be induced to eat. For those dogs, Entyce® might be very helpful.

Entyce®/capromorelin also increases the body’s production of true growth hormone (GH aka somatotropin) and IGF-1. Both substances are anabolic agents. That is, they favor the generation of new muscle, overall vitality and positive mood. But over time, anabolic agents can also have negative effects on blood pressure, blood sugar level, the liver and the heart.

So far there is no independent information in the scientific literature to allow veterinarians to estimate the effectiveness of Entyce® in dogs. What there is was all paid for by Aratana, the company marketing the product. (read here) There are so many reasons a pet might not want to eat. The drug may not work for all of them. When Entyce® is effective, it is thought to be working primarily through appetite centers in your dog’s brain – not affecting the underlying health issues responsible for your dog’s lack of appetite. But with the drug’s multiple targets throughout the body, that is not entirely certain. When it does work, the effects of Entyce® are rapid (a matter of hours), so it should not take long to see if it is beneficial to your pet or not.

In clinical trials in dogs, side effects were said to be minimal. They included diarrhea, vomiting, increased thirst and drooling (hypersalivation). In one news release, the Company said that 68% of the dogs given Entyce® were reported by their owners to be eating better, versus 44% of the owners who receive a similar looking liquid that did not contain capromorelin (a placebo) that also though their dog’s appetite improved.

The precautionary statement released with the drug suggested that Entyce® be used cautiously in dogs with liver or kidney problems or in pets receiving other medications that might adversely affect their liver. When the drug was given to beagles daily at the recommended dose for one year, increased salivation, reddened/swollen paws, increased liver size and changes in liver cells were noted in some of the dogs. Higher daily dosed were associated with increased blood cholesterol, AP and HDLs .  But direction labels change as new data becomes available and you would be wiser to read the package insert that comes with the Entyce® bottle you veterinarian gives you or find the current label on the company’s website.

There will probably be off-label uses for Entyce as well. Even before this medicine is available veterinarians were discussing what those other uses might be. Some thought that older dogs in mental decline might benefit. Others that dogs with intestinal stasis (ileus) might benefit. (read here ) Because of its potential anabolic effects, it has also been suggested for dogs with extensive skin burns or skin disease, cancer, chronic constipation and megacolon. In all those cases, it might be wise to closely monitor your pets liver and kidney function until veterinarians understand the long term effects of these drugs better.

Since capromorelin’s effects are similar in humans, rats and dogs, I see no reason, as yet, why this drug might not have applications in cats as well as dogs. In fact, the Company stated in one presentation that capromorelin ‘s effects on cats were similar to those in dogs. (ACVIM meeting Nashville 2014) Cat process certain medications differently than dogs – particularly those that are modified or eliminated by their liver. So I would be quite cautious in the off-label use of Entyce® in cats until we understand its affects in cats better. Go to the  cat owner comments page  for some feedback I have received on its use in cats. Or contribute your own.

I am always happy to receive reports from pet owner who have given Entyce® to their pets. Or from anyone else who has information to share. You can contact me and I will add it here or to the dog Entyce® or  cat’s Elura®  comments pages.