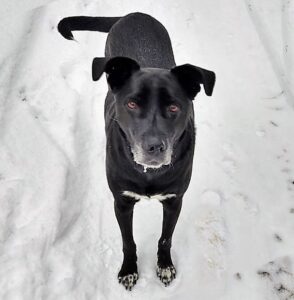 Skin allergies have always been a most frustrating disease for dog owners, dogs and veterinarians like me tasked to treat them. If you include the mild cases, allergic skin disease/canine atopy probably affects 10-15% of the dogs in the developed world. (read here,  here  &  here)

Zoetis’ Cytopoint is a dramatic leap forward in your dog’s treatment options. In the majority of cases it will dramatically help your dog. However there will always be a few dogs that show less improvement than desired (=partial responders) and others like the one in the photo that showed early improvement that fizzled with successive injections (non-durable responders). There will also be a few that show little if any improvement at all. That is because the itch process is so complex. (read here &  here)

Here is an email I received:

My dog G* is a neutered male Black Lab/Springer Spaniel. He is 7 yrs old. G* received his first Cytopoint shot in July of 2019. It was amazing. He completely stopped itching in 12 hours. That 1st Cytopoint® injection gave him relief for 5 months. But the 2nd shot didn’t produce as quick an improvement as the first shot. It’s Feb a week later and he’s still licking his feet and groin and biting his nails every day. He was on Apoquel for 2 years before we adopted him from the rescue. At the time he had severe allergies, ear infections, licking, biting, bare spots, super-oily smelly skin. Also air licking. G* records said he also had severe anxiety.  He has had no infections since we’ve had him on Cytopoint. It seems Cytopoint is the better of the two medications. ​We were bathing him daily at first now 2x week. But now he is no longer responding to Cytopoint at all. He gets only minimal relief after the injection. I had heard about the possibility of developing antibodies to the drug which our holistic vet thought had happened. She put him on a low dose Apoquel that doesn’t seem to help much while trying different Chinese herbs. We didn’t continue getting Cytopoint although local vet wanted to still give it even after it didn’t work well which is confusing to us because of the antibody talk. I know you can’t answer question about individual pets but could you let me know whether in general you’ve ever heard of other dogs having a good response after a poor one? Would it be worth it to try again in a dog with that sort of response or just assume he has developed antibodies? Maybe its because he came to us with severe anxiety too. Sorry to bother you with this and if it’s something you don’t usual answer or can’t due to legal restrictions I understand.  Just thought to ask. I called Zoetis but they weren’t able to give me an answer.

I described G*’s problem to a group of human dermatologist who study Dupixent®. Dupixent (dupilumab) is also a monoclonal antibody. It is approved to treat allergic dermatitis (atopy) in people. These three research dermatologists also noticed that some people benefit greatly from the drug. But a subset of patients only obtain partial relief from itching (“partial responders”) and another got sufficient relief from the first few shots but with time, the dupilumab gave less and less relief (“non-durable responders”). Comparison of Dupixent’s effects in humans with Cytopoint’s effects in dogs is not without issues – but it does give us insights. Cytopoint® blocks the actions of an inflammatory cytokine IL-31 while Dupixent® blocks the actions of two other inflammatory cytokines, IL-4 and IL-13.

This is the treatment flow chart they produced: 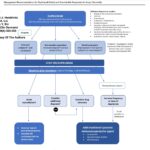 Read their article abstract here or ask me to send you Hendricks2019.pdf

I wrote to them about G*s case. Their first thought was that G* had produced anti-drug antibodies (ADAs) against Cytopoint. Read about antibodies targeting other antibodies here and here. ADAs are thought to be the most common reason injected monoclonal antibody drugs cease to be helpful.

How Long Should I Wait Before Making A Decision If It Is Helpful?

Three monthly Cytopoint injections would be my answer – but stop immediately if the shot(s) appear to make the situation worse. That is often due to “blossoming” of a skin staphylococcus infection. Persistent antibiotics to control staph just generate antibiotic-resistant staph which are also a threat to you and your family.

The second most common reason is an itch that is driven by factors other than allergy or in addition to allergy. A sizable number of patients that failed to benefit from Dupixent had psychological issues – fear and anxiety issues. neurotic tendencies and the like. You might recall that G* faces some of those same issues. In dogs, a common additional one is separation anxiety.

Dogs do occasionally suffer from behavioral dermatitis. Veterinarians generally treat those issues with SSRIs like Reconcile® (aka Prozac®) or clomipramine (Anafranil®). Acepromazine , besides being calming, has some antihistamine properties as well. (read here) Even mirtazapine , commonly given to dogs and cats as an appetite stimulant, has some anti-itch effects. (read here)

I have no access to Zoetis secrets. But I do know that the production of monoclonal antibodies (mAb s) is highly complex and therefore more subject to error. ( read here ) If I had a dog that ceased to respond to a Cytopoint® injection, I might ask for its next shot to be from a different lot number. Dogs need to be weighted before every injection so as to receive the correct dose.

On flow charts suggesting options for people who do not respond to Dupixent® the suggestion is that they be checked for scabies infection  (human sarcoptic mange=The Seven Year Itch). If your dog does not respond adequately to Cytopoint®, it might be wise to ask that the Idexx ELISA test be performed. See the test here: 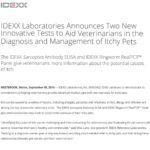 Sarcoptic mange,once it has been present for a long time, becomes very hard to diagnose through skin scrapings at your animal hospital. Should the test be positive or even without the test, Simparica® has been found to destroy mange mites. (read here)

Occasional dogs have a skin odor change associated with Cytopoint® injections. I associate that with a “bloom” in their skin staphylococcus bacteria population. A “bloom” in skin staphylococcus bacteria has been associated with Dupixent failure in humans. Some dogs are highly allergic to staphylococcus. (read here) Antibiotics will never cure a skin “staph” problem. They will only suppress the bacteria for the time it takes for these bacteria to become immune to the antibiotic. Your best option is to include a non-specific topical antiseptic lotion in your dog’s treatment plan. Staph overgrowth frustrates human dermatologists too. (read here)

Your dog produces its own corticosteroid (cortisol) in its adrenal glands. In humans, a lack of sufficient cortisol has been associated with itching – probably through increased activation of IL-2 .

Should Cytopoint disappoint you, don’t neglect a two-month trial on a hypoallergenic hydrolyzed protein diet such as Purina’s H/A® , Hills  z/d® or Royal Canin’s HP® . Contrary to what these diet manufacturers tell you, the vast majority of itchy dogs don’t have a food allergy. But it’s always worth a try. Buy a can or two or small bag first to see if your dog will eat it.