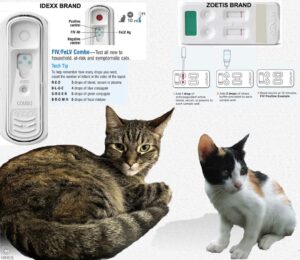 Does My Cat Really Need Them? 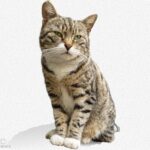 Feline Leukemia (FeLV) and Feline AIDS (=FIV,=Feline Immunodeficiency Virus) and FIP are the most serious infectious diseases that cats in the United States Face. Next to automobile accidents, the first two virus kill more cats than anything else. Between 4-10% of all the cats in America are probably infected with one of these virus.

Feline leukemia is a diseases that is preventable in your cat through vaccination. But your veterinarian must give the vaccine before the virus arrives. Vaccines against feline AIDS/FIV are more problematic. The immunodeficiency virus that causes feline AIDS has many mutant forms or strains. Vaccines on the market seem to protect well against the virus strain used to produce the vaccine; but they are considerably less effective when your cat encounters a different strain of the virus. You can read more about Feline Leukemia here and Feline AIDS/FIV here. It probably does not harm a cat to give it a feline leukemia vaccination if it is already positive for the disease. But it does not help either.

Several very reliable tests have been developed to tell if your cat is free of these virus.

The one that most veterinarians use is the one that tests for both of these virus at the same time. It is produced by Idexx Laboratories. You can read the instructions that come with the kitshere and see more images of what it looks like here. But some shelters can only run the one for feline leukemia because of cost. This test is also called a “Feleuk” test, a Snap test or an FeLV test. This Feline Leukemia portion of the test uses ELISA technology to detect even the smallest amount of leukemia virus in your pet’s blood.

A second type of test, called an IFA (immunofluorescent antibody test) is the preferred FeLV test at larger diagnostic laboratories because it costs less to run. That test also detects the FeLV virus themselves. As with the Snap test, those labs look for any antibody a cat might be producing against the feline immunodeficiency virus as evidence that the cat is infected – not the virus itself (ELISA test and Western Blot).

There Are Three Situations When This Combination Test Is Desirable To Have Run:

The first situation is when you obtain a new cat. Most cats that carry these virus show no health problems for a considerable period of time. So the cat you just obtained might already be infected. This is especially important if you have other cats. But it is also important if you have only one cat because cats that are positive for either of these virus need special management and care.

Another time the tests should be run is when a cat appears ill. Both Feline Leukemia and Feline Immunodeficiency Virus (feline AIDS) are great pretenders. That is, the problems they cause often masquerade as something else. Perhaps a stubborn ear infection or rash. Perhaps mouth infections, weight loss, mopyness or bouts or diarrhea. You can spend a lot of time and resources treating what appear to be small, curable problems when FLV or FIV are the real underlying cause of your pet’s poor health. Once you veterinarians knows that either of these virus is the real underlying problem, his/her treatment strategy will probably change.

The third time a test should be run is when your cat was exposed to a cat that was later found to be carrying either virus. The test should be run at least a month after the incident because the results may give a false negative result if run too soon. Many owners are not willing to wait that long. In those cases, run the test sooner, but follow up with a second test later on.

What Do The Test Results Mean?

If your cat has a negative reading on these tests to the FeLV portion of the test, it means it was never exposed to the FeLV virus or Or it was exposed and recovered. If exposure was likely and the cat is negative, it should be re-tested in a month.

A negative FIV portion of the test means your cat was never exposed to the FIV virus.

Or it was exposed so recently that the cat’s body hasn’t produced any antibodies yet. Some cats do not become positive for 8 – 12 weeks after exposure. A very few cats take even longer to produce a positive test result.

Or it was vaccinated against FIV. That is another disadvantage of the current vaccines we have.

In rare instances, cats that are very ill with FIV are too sick to produce antibody. These cats will also have a false-negative test result. When this is suspected, another test called the FIV PCR test will determine if the virus is present in their blood.

Usually a positive test result to FeLV means that your cat has the disease. However, there are occasional false-positives. So a second test should be run using the IFA method. The cat should also be retested in a month to confirm the results. If the cat is already ill – the first results were almost certainly true.

If your cat is over six months of age, this means your cat has or had the disease. Cats almost never recover from FIV infections. So in all likelihood your cat is infected. It is wise, however, to have the test repeated by a different laboratory using a different technique (Western Blot).

Mother cats with FIV pass antibody to their kittens whether the kittens become infected or not. So positive test results in kittens do not mean they harbor the virus of FIV. If kittens are positive, they need to be retested every two months until they are six months old to see if their tests becomes negative. If the test is still positive at six month, they probably have the disease.

Will Vaccinating My Cat Against Feline Leukemia Cause It To Have A Positive Test?

Current vaccines will not interfere with FeLV testing.

Will Vaccinating My Cat For Feline Immunodeficiency Disease (feline AIDS) Cause It To Have A Positive Test?

The SNAP FIV/FeLV combo test from Idexx detects antibody against FIV. It can not tell antibody from a vaccination from antibody from the disease. That goes for the standard tests run at central veterinary laboratories too. Only the PCR test will tell you if the FIV virus is actually present.

Should I Have My New Kitten Tested?

It is true that kittens produced from mothers that are positive for these virus may still have their mother’s antibody in their system but not the virus. If so, they would show as a false-positive on the test. But you need to be alerted that infection with these virus is a definite possibility and manage the kitten accordingly until it is retested at six month of age. That is the only sure way to determine if the test was a true positive or a false positive. Thoughts differ on the value of the FIV PCR test in deciding if a FIV antibody-positive kitten actually harbors the virus. (ref)