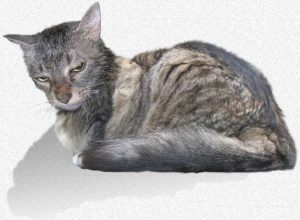 In the last fifteen years, veterinarians have begun to recognize that a group of gram negative bacteria called Bartonella are involved in a large variety of disease in cats.

These diseases can involve chronic inflammation of tissues in various locations in your pet’s body or they can cause no visible symptoms at all. Veterinarians suspect that cats with a strong, healthy immune system overcome this bacteria while cats facing other concurrent health issues or stress have difficulty in doing so.

For years, veterinarians were faced with unexplained eye inflammation in cats. Not too long ago, veterinarians found that Bartonella could be at the root of some of these perplexing cases. (ref)

Unfortunately this organism is very hard to isolate and grow in the laboratory. It is also quite common for cats to have been exposed to Bartonella without developing disease. So just the fact that tests show that your cat was, at some time, exposed to Bartonella does not mean that Bartonella is the cause of its current problem.

The most widely known disease caused by the Bartonella organisms is cat scratch fever in humans and cats. Dogs can also become infected. But, sometimes, the only signs we see in infected cats are inflammations of the eye. Cats with this disease can harbor Bartonella for years without any signs of sickness.

leas spread the organism from cat to cat. Fleas and ticks also have the potential to transmit the organism from pets to their owners. Some sources estimate that one in five cats is a carrier of Bartonella but this may be an exaggeration.

In addition to cats, five to ten percent of pet owners who contract cat scratch fever from their pets develop eye inflammation. This inflammation takes many forms. All portions of the eye can be affected. One or both eyes can be affected and even the eyelids may be involved.

In another study of cats showing eye inflammation, 67.5% were positive for Bartonella using these test.

Recent studies have shown that several antibiotics are successful in eliminating Bartonella infection. The least expensive of these antibiotics is doxycycline. When using doxycycline capsules or tablets in cats, it is important to wash the pills down the cat’s throat with liquids to prevent ulceration and inflammation of their esophagus.

Another antibiotic, azithromycin (Zithromax®) is also effective. Azithromycin is currently the veterinary drug of choice because it will also kill mycoplasma which are another common cause of eye inflammation in cats.

Rifampin® (Rifampicin, etc.), an antibiotic often used to treat human tuberculosis, is also effective in treating bartonella when it affects the eyes of humans. It is usually administered in combination with other antibiotics.

While a cat is being treated, corticosteroid and atropine-containing, eye drops are often given to inhibit scaring and pathological changes to the structures of the cat’s eye. Non-medicated eye drops also help correct dry eye, which occasionally occurs, with azithromycin administration. When treatment is successful, antibody levels to Bartonella should begin to decrease in six month. PCR tests for the organism’s presence should decrease sooner.