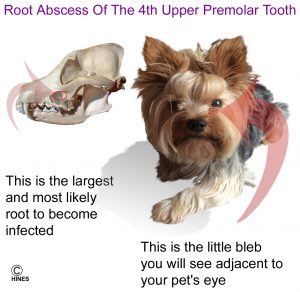 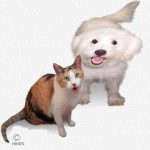 Why Do We Have Bad breath?

It is not uncommon for dog owners to visit their veterinarian perplexed about a small draining pustule (“pimple”) or abscess that has forms just under their pet’s eye. It might be there for a month or so and then mysteriously disappear – only to return a few weeks later. Sometimes, it is only the squinting of the eye on that side of the pet’s face that is noticed. In other cases, just some puffiness surrounding that eye. In those cases, antibiotic eye ointments might be prescribed. Whatever the treatment, the problem keeps returning. With time, a slight lump of bone might be felt below the drainage point. The Yorkshire terrier in the photo above shows the most common drainage location. The material that drains from this pore is usually a pinkish liquid composed of pus cells (=WBCs), degenerating tissue and red blood cells  mixed with body fluids (=a mucopurulent discharge). Occasionally the problems produced by this tooth problem are more complex and easy for a pet owner to misinterpret. Read about one case like that here.

Although the spot never actually goes away, it doesn’t seem to bother your dog much – pets with this problem usually remain bright, alert and happy. Clients often just bring it up in passing while their pet is being examined for something else.

Dog owners are often surprised when their veterinarian tells them that the actual problem is in their pet’s mouth. What has happened is that a chronic root infection is present in one or more of their dog’s 4th upper premolar tooth roots on the side where the skin pustule is forming. The 4th upper premolar is also called the carnassial tooth.

The 4th upper premolar is a massive tooth in the dog’s upper jaw (maxilla). It is the largest tooth in your dog’s mouth. The tooth has three long roots, the tips of which reach up into the maxillary sinuses – the area where a tooth root abscess can form.  When it does, it is often the rear root closest to the eye that is most affected.

Your dog’s two 4th upper premolar teeth are designed to shear meat and crush bone against the two a slightly smaller carnassial teeth on its lower jaws (the mandibular first molar teeth). These two teeth shear in an angular fashion (like scissors). So there is a lot of powerful side-wise forces when these two teeth are in action.

Occasionally, a portion of the tooth’s edge will shear off on some hard object (a slab fracture). Occasionally, a crack forms in the crown. But in most cases, when a 4th upper premolar root infections forms, there is no evidence how that infection began. Some think the bacteria arrive at the root tip via the blood stream. Others believe that the bacteria work their way under the gum line. I believe that the sideways forces this tooth is subjected to compromise blood flow to the root area beginning a process of chronic inflammation that eventually leads to tooth socket damage, infection, root abscess pocket and pressure.

Dissolved surrounding tissue, white blood cells, body fluids, blood and bacteria make up the pus that drains from the point just under the pet’s eye (a fistululous tract). Once expelled, inflammation subsides, pressure is relieved and the fistula can seal over – for a time. Oral antibiotics give temporary relief – but no permanent cures because living bacteria find shelter in the pores of the now dead tooth root.  Like a thorn, the body wants rid of it.

What Needs To Be Done?

The treatment suggested by most veterinarians was – and still is – to remove the infected tooth. It is a procedure that must be done under general anesthesia. To remove the tooth it must first split it into two sections; the anterior portion with two roots and the rear portion that has one root. Unless periodontal disease has destroyed the bone that anchors the tooth, it can never be removed as one unit because the angle of the roots lock it in place. First, a flap of gum tissue is partially removed to expose the surface of the roots on the cheek side of the tooth . Veterinarians differ in how they split this tooth into two sections. I personally, use a diamond dental cutting disc. Once accomplished, the roots must be separated from the surrounding bone with dental elevators 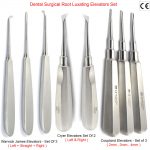 and gently rocked with a molar extractor 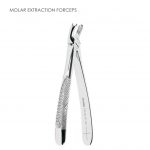 until the tooth portion is free. Then the extracted portion must be carefully examined to be absolutely sure all of the roots came out intact. Your dog will go home the same day with antibiotics and some pain relieving medications. Generally the gum sutures come out in a week unless they were designed to dissolve on their own. Some vets suggest the site be irrigated with hydrogen peroxide at home – if the dog allows it. Its diet should be soft and bland for the next 7-10 days. You can read about the standard techniques here. I will send you the full article is you ask me for Niemiec2008.

Dogs do just fine with the 4th upper premolar tooth (or teeth) removed. However, there are veterinarians today who specialize in endodontics and dentistry. Their inclination is to save as many teeth as possible for as long as possible. They can often perform a root canal on this tooth and save it. If not, implants are possible. I rarely suggest that this be attempted but I want you to know that the option might exist. Perhaps it would be worthwhile to salvage an attack or guard dog – although most work dogs do not need that tooth to function effectively. If you want more details on how this surgery is performed let me know. Ask for carnassial-Reiter2005 & carnassial-Ruhnau2003