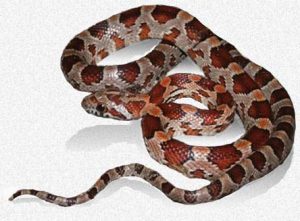 Snakes have a magical quality unlike any other pets. Perhaps it is their effortless motion, silky sleekness or unfathomable thoughts that make them so bewitching. Other than the venomous varieties and a few that are quite cross by nature, they make excellent pets that adapt quickly to captivity and seem to enjoy it.

Choosing The Right Kind Of Snake

The most popular snakes kept as pets in the United States are kingsnakes, boas and pythons. It is illegal in most states to collect snakes from the wild. Most families will be most pleased with a snake that matures at about three feet in length and 2-4 pounds in weight. Large boas and pythons are not good choices for beginners. I suggest that you not purchase adult wild-caught snakes. They often never tame down to become good pets.

Choosing a health pet is as important as choosing the right species for you. Ideally there will be several of the same breed and age to choose from. Pick a snake that has a smooth glistening skin without imperfections. The mouth and eyes should be clean and free from crusts and mucus. It should be alert active and bright-eyed. If it is a member of a clutch it should be one of the larger ones. Nothing should protrude from its vent. The facilities holding these snakes should be clean and sanitary and free from odor. Snakes can be “probed” by an experienced person to determine sex but there is no difference in temperament between male and female. It is often wise to visit a local zoo before you purchase a snake so that you can see these animals at their adult size. Their herpetologist will often take the time to discuss the pluses and minuses of each species with you.

Kingsnakes make excellent pets. They are nonvenomous member of the Colubridae family of snakes. These snakes are hardy, beautifully marked and very hardy. Because they are native to cooler climates, they do not suffer as much as tropical snakes do during the winter months. Kingsnakes have even temperaments and are gentle with adults and children. They are naturally found in a wide variety of habitats in the United States. They generally have a pattern of alternating dark and light bands. Kingsnakes are known for eating other snakes, including rattlesnakes. In the wild they feed on lizards, birds, eggs, small mammals, turtles, frogs and smaller snakes. In captivity they do well on a diet of mice and small rats. Kingsnakes, kept as pets, can be taught to accept dead, thawed rodents. They are most active in the morning and late afternoon. Kingsnakes are constrictors that wrap suffocating coils around their prey. Kingsnakes lay clutches of 5 to 25 eggs that hatch in 45-80 days. Hatchlings are 8-14 inches in length. They reach maturity in 3-4 years. Captive born kingsnakes are commonly sold in the pet trade.

Boa constrictors are native to South America. Immature individuals are commonly imported or bred for the pet trade. There are ten species of boa constrictors. Like kingsnakes, boas subdue their prey by encircling and suffocating them. They eat almost any animal small enough to be ingested including fish, turtles, lizards, birds, rats and other small mammals. In the wild, boas hunt using heat-sensitive pits on the scales around their mouths. Common tree boas mature at about 39 inches in length weighing 4-5 ounces. The largest of the boas, the aquatic green anaconda, can weigh well over one hundred pounds. Boas are known for their placid temperaments, which make them ideal as pets. Yet their mature weight is not so great as to make them dangerous or a difficult species to maintain.

This large group of egg-laying snakes included African and Asian species that range from the Ball Python which matures at 4 to 6 feet in length and 5 pounds body weight to the giant pythons including the Indian, African Rock and Reticulated and Burmese pythons. The largest of these, the Burmese Python grows to over 20 feet and 200 pounds. They are strikingly marked and because they are sold when they are quite small, owners often make the mistake of not anticipating their huge adult size. When they grow into their mature size they are a challenge to maintain. Restricting the amount of food fed to slow weight gain is a poor idea that makes the snakes cross and snappy.

Caging. Snakes do best in glass-sided terrariums with a plastic mesh top. The terrarium should be at least twice the snake’s length and one half the snake’s length in width. Cages can not be too large. A 55 gallon aquarium is often a good start. The floor can be covered with newspaper ,paper towels or Astroturf™. Certain snakes will ingest pine bark, corncob bedding or terrarium along with their food and become impacted. Although most, snakes do not you never know which will have the problem. The snake should be provided with a hollow log or container to hide in. Clean the cage regularly with a good dish detergent such as Dawn. Spray disinfect the cages after they are cleaned with a 1:20 solution of household bleach.

Place one or two aquarium thermometers in the snake’s enclosure. Snakes do best at temperatures ranging from 86F (30C) to 90F (32.2C) and humidity of 50-85% depending on species. Boas and pythons do best at the higher ranges of temperature and humidity while snakes coming from arid or cooler regions do best at the lower ones. These temperatures can be maintained through a central home air conditioning system and pans of water or soaked sponges help in elevating humidity. A heavy duty heating pad, placed under the terrarium on one-half its length will establish a temperature gradient so the snake can select its comfort zone. Snakes that are maintained too cold suffer from poor digestion as well as increased infections. I do not suggest the use of “hot rocks”. They often cause burns. The temperature of large snakes can be maintained using a livestock heating pad designed for swine.

Most snakes can be taught to accept dead, thawed prey. The size of the food fed can be two times the size of the snake’s head. Some common food items are rats, mice, chicks, guinea pigs and rabbits. They can be purchased frozen from a national distributor such as  Gourmet Rodent.

Baby snakes should be fed every week. Adults can be fed every 2-3 weeks. Do not leave live rodents in the cage with your snake unattended – they often bite the snake.

Water. A large shallow water dish should be present for every snake. They will not only drink this water, they will also bask in it which facilitates shedding.

Some Of The Reasons A Snake Will Not Eat:

There are many reasons a snake will not eat. Snakes that were recently imported often do not eat readily. Most snakes sold at pet stores are recent imports and many, especially mature individuals, did not eat since they were captured. Give it a good environment and be patient – they can live many months without eating. Many snakes prefer to eat at night so introduce a living prey to them in the evening. Remember not to leave a living prey unattended.

Respiratory infections in snakes are common. They occur in immunosupressed snakes and are caused by common household contaminant bacteria. These infections manifest themselves as excess fluid in the mouth and nostrils, gaping of the mouth, listlessness and incomplete sheds. These infections result from inappropriate conditions such as cool temperatures, dry air, dehydration, stress, and parasites which all cause the snakes immune system to fail. To treat respiratory infections, we increase the temperature to 90F and eliminate or reduce all possible stress to the animal. If the condition persists, antibiotic therapy is required. The fluroquinolones (eg Batryl®/enrofloxacin), “Cipro” (ciprofloxacin)  are often helpful in treatment. However, these snakes often never entirely rid themselves of the problem and relapses under stress are common. Most respiratory problems occur during the colder months of the year or shortly thereafter.

“Mouth rot” consists of cankers or ulcers of the oral cavity accompanied by increased mucus. It is also called Ulcerative Stomatitis. Mouth rot and pneumonia have a similar cause – decreased immunological function or immunosuppression. This is usually caused by too cold a room temperature. Mouth rot is usually accompanied by infection of the blood with bacteria (septicemia). We treat it with antibiotics and increased ambient temperature (90-98F). Mouth lesion can be cleansed with 1.5% hydrogen peroxide solution or organic iodine (Betadine®, Povidine®, povone iodine) solution. Aeromonas and Pseudomonas bacteria are often the culprits. Periodic intramuscular injections of vitamins are also quite helpful. These snakes often must be force-fed.

Incomplete shedding and retained corneal coating is a common result of too cool a temperature and too low a humidity. Retained corneal tissue and skin should be softened with propylene glycol or baby oil before it is removed. Soaking the snake in a dish or vat will also loosen retained skin.

Mites are common on recently purchased snakes. These are small reddish or brownish parasites found wedged and embedded at the corners of scales. In small numbers they are a nuisance, large numbers can cause anemia. I treat them by wiping the snake down with a 0.005% solution of permethrin. Simply wiping the snake with baby oil will plug the mites breathing vents (spiracles) killing the parasites. At the same time the snake is treated, the cage should be disinfected with boiling water.

Internal Parasites are common in wild-caught snakes. It is wise to take a stool specimen from new snakes to a veterinarian for examination. The most common parasite found are roundworms. In small numbers, these parasites cause little damage. Heavily infested snakes remain thin. I generally treat these snakes with fenbendazole.

Inclusion Body Disease is a disease thought to be caused by a retrovirus. (ref) Not all snakes that show evidence of infection with this virus appear ill. (ref) This disease has been found in captive-bred pythons and boas. The disease does not respond to treatment. As mentioned in the last reference, some snakes carry the virus without symptoms (particularly boas). Those snakes that do exhibit signs of the disease eventually die. Some signs of this infection are paralysis, weight loss, listlessness, blindness, regurgitation and retention of shed skin. The virus appears to also predisposes snakes to other diseases such as mouth rot. Inclusion body disease (IBD) is best diagnosed by examination of the snake’s kidneys and pancreas. Affected snakes usually show pink-staining inclusion bodies within the cells of these organs, however many other organs and systems of the snake’s body are also affected.