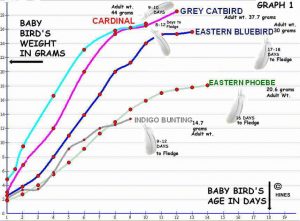 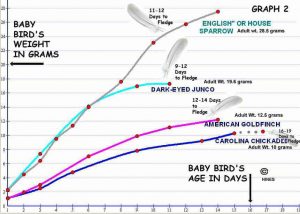 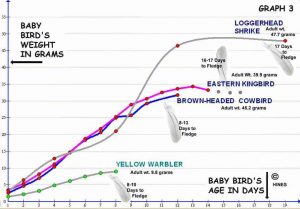 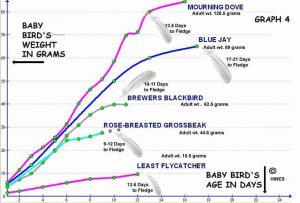 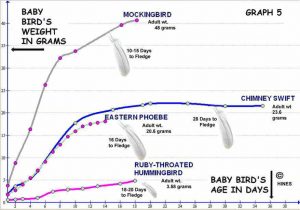 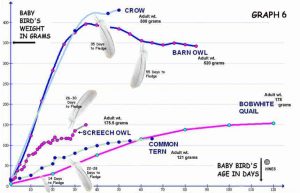 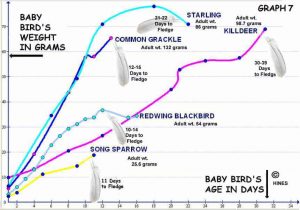 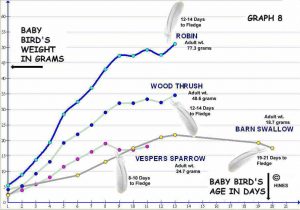 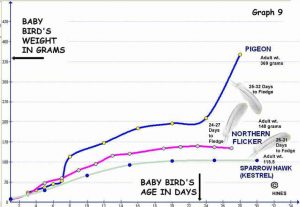 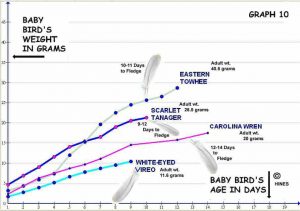 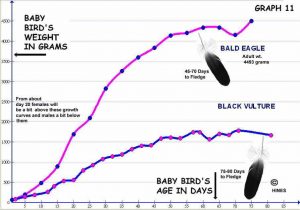 These growth rate graphs can only be used to give you an approximation of the growth of the baby bird you have found. This is because of a number of things:

2) These graphs do not divide the growth of male babies from female baby birds – they give an average individual combined nestling weight. In songbirds, males tend to gain weight faster and end up heavier than female birds. The opposite is true for the birds of prey.

3) The third factor is that the baby bird’s weight – from the day of hatch – varies depending on the availability of food to feed it. Some years provide better food supply than others. These graphs were prepared from wild nestlings. The baby bird you raise will have unlimited food available. So it will often gain weight more rapidly than parent-fed babies.

4) The fourth factor is the number of babies in the nest. When only a few chicks are in the nest, each chick has more food available to it and will grow faster.

5) Some parent birds lay their eggs a few weeks early or a few weeks late. When this happens, the parents may miss the time when their favorite foods are most available, causing the chicks to grow more slowly. The same thing occurs when rain or unusual weather occurs during the breeding season.

You can see from these graphs that most baby bird’s growth follow an “S” or sigmoid curve early on. The big difference between small species of birds and large ones is not that the large ones grow faster – large species of birds just keep growing longer.

The absolute weight of your baby bird is not important. What is important is that it stays on track, above, on or below its growth curve graph. The best way to tell if your bird is developing normally is to palpate its keel or breast bone. If it is convex – like the chicken breasts sold at the supermarket – it is fine. If it is V-shaped or concave, you have a problem. Looking at the bird is not sufficient because you can be fooled by fluffy feathers that hide a thin bird.

You will see from the graphs that some species of baby birds over-shoot their adult body weights before they fledge. Others gain their last few grams weeks or months after they are flying on their own.

You will also notice that there is often a small dip in body weight near the time that the baby bird leaves its nest. This is because it is not getting all the food it would eat. It is hunger that gets the little bird airborne at an early age. You should not see this fledgling weight dip if you are supplying all the food that your youngster desires. Perhaps the parent birds were just exhausted and unable to keep up with the clutch’s growing need for food. Perhaps it is the hormonal rush at fledgling that causes the baby birds to become antsy and hyperactive at fledgling time. Probably it is a combination of the two that causes this dip.

It is not healthy to push the limits of a baby bird’s growth potential by over-feeding. In some birds I have raised (penguins) this led to chicks with muscle weight too heavy for their bone structure to support – causing curved spines and foot problems (bumblefoot). Bigger is not necessarily better.

Your hand-fed baby bird is going to learn to fly later than the feather position on my graphs indicate. Have patience, some human teenagers need encouragement to leave the nest – but they all eventually do.

The hatching weight of baby birds is approximately their egg weight minus the shell weight. It is slightly less once they have dried off.