A Wildlife Rehabilitator’s Guide To Raising Killdeer And Plovers 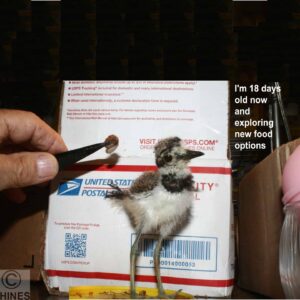 Precocious birds are the ones that are able to eat on their own within a day of hatching – birds like ducks and geese, quail, chickens, pheasants, rails and shorebirds. I only know of one shorebird (plover) that decided to abandoned the beach for the fields – the killdeer. Every year one or more folks bring me a baby killdeer or killdeer eggs. If candling shows that the egg it only a day or two short of hatching, I used to put it under a broody silkie bantam chicken to hatch. Killdeer, like nighthawks, lay their eggs on the ground. They do not build a nest. Killdeer prefer open, sunny terrain. So young ones are often brought to me by young children or their teachers after being found in the schoolyard. Killdeer also find the flat gravel-coated roofs of schools and commercial buildings convenient egg-laying  sites. Golf courses attract them as well. After a time on flat gravel roofs, the chicks tumble down to the school yard and some end up with me as well. Their main threat in life are loose, domestic cats. 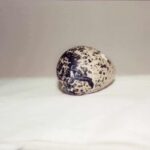 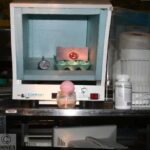 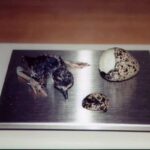 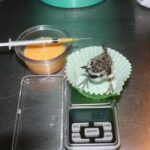 Do not expect a killdeer chick to stand erect on its first morning after hatching or when they come in too weak and dehydrated to eat on their own (they often are). I give those a very small amount of subcutaneous 5% dextrose/0.45% saline solution that my local hospital saves for me (perhaps 2 or 3% of their 8-9 gram body weight).  My favorite syringes for all small birds are U-40 insulin syringes (although the 29 gauge U-100s are fine as well). Birds that have sat outside in the sun can usually be assumed to be dehydrated. When a juvenile bird (or mammal) arrives dehydrated, even if you manage to feed them their correct diet, the food you give will not be absorbed. Read more about that here.

When I do begin feeding fragile killdeer chicks, I begin with beaten raw egg (as in the second photo above). For tiny foundlings I have found that beaten whole raw egg will pass through a 24 gauge, 3/4 inch length human IV catheter. So those are among the things I ask my local hospitals to save for me once their expiration dates have passed. 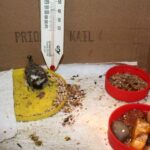 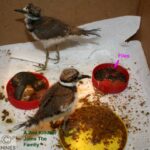 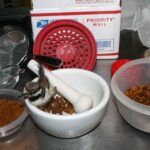 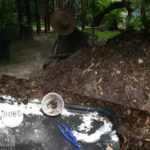 Later I offer killdeer a mixture of diced wood cockroaches, earwigs and flies placed in shallow plastic lids. One easy way to collect ground-dwelling insects is to lay pieces of old carpet upside down over damp ground, dampen them daily, wait a few days, and then collect the critters that have collected in and under them. To collect flies, I have the fly traps you can see below. I avoid feeding pillbugs because they can be the intermediate hosts for a number of bird parasites – particularly when you have starlings live in their vicinity. Of course any ground insect (or worm) that feeds on bird droppings can carry bird parasites. Diced farm-raised meal worms avoid that risk (as long as hen-house manure was not used to grow them). The red jar lid contains moistened granules of canned Friskies Purina Meaty Pate™, the third contained ground up Purina Cat Chow Complete™ and a fourth contains boiled white proso millet. Of the four choices, killdeer prefer the ground cat chow and the flies. If pieces are a bit too large or hard for them to swallow, they sometimes carry them over to the water bowl and drop them in – perhaps to to soften them as grackles do. Live cockroaches are about 9% protein, flies about 10%. Purina Cat Chow is about three times that amount. So the cat chow is within the protein ball park when moistened. I always place smooth river stones in the water dishes of small precocious birds to discourage them from standing in the water and becoming wet and chilled. 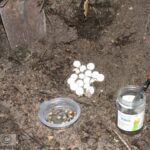 As the killdeers near release age, I wean them over to more natural foods. Our kitchen scraps and those of our neighbors, mulch from Asplundh and topsoil all gathered into a compost pile yields a wide variety of insects. Grabbed with tweezers, they all end up in a small “bug” jar in one of the rehab fridges. I took the photo above the day I encountered the clutch of eggs of a turtle that wandered up from our pond. Grubs and earwigs are the most common insects in our pile. Pillbugs abound. Earthworms, roaches, spiders, worm snakes and something that resembles a super mealworm are occasionally encountered. Living in an area where rains are unreliable, the pile needs a daily misting. 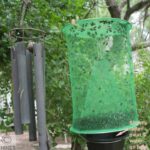 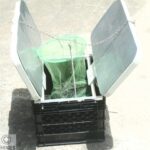 I find that house flies are the easiest insects for me to obtain. But studies and common sense show that house flies have the potential to spread various diseases and parasites. I use the outdoor solar cooker shown in the second photo to toast them four two sunny days before I bottle them and store them in a freezer. On a sunny summer’s day here on the Mexican border, the interior of our cooker reaches 65 C/149 F.  I bring the unit into the garage late in the afternoon and repeat on the next sunny day.  In “bush crickets” ( we call them katydids), heating actually increases nutrient availability – not that I am ever going to eat a bug intentionally. ( read here ) Like most insects, flies are a poor source of calcium. In  house fly larval  (maggots), calcium to phosphorus ratio is about 0.5:1 – the reverse of what animal nutritionists usually suggest. I do not know what the Ca:P ratio of adult flies are. I rehydrate the flies in warm tap water until they sink before I offering them to the birds. Killdeer love them, flycatchers not so much. Night jars will eat flies when they are presented to them with tweezers – but they prefer moths. 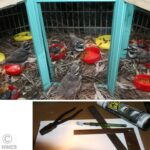 Unlike my earlier experiences in Chicago, it is now uncommon for me to be raising more than one killdeer (or other avocet) at a time. The cats have taken their toll. But this summer I happened to receive two of them only a few weeks apart. When raising only one, I believe that you can help young killdeer from imprint on us humans by exposing them daily to a mirror box similar to the one in the photo above that I constructed. 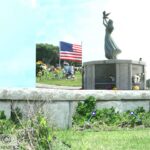 What Are Good Places To Release Hand-raised Birds?

I spend a lot of time considering and worrying about that. I am sure you do too. It is so easy for people like us to become emotionally attached to these feathered little creatures we assist. As cities grow, as feral cat colonies proliferate, safe release locations have become harder and harder for me to find. For these particular two killdeer, I had a look at several urban parks and locations: At one there were too many off-leash dog and children. At another it was too close to high-traffic roads. At some undeveloped land on the outskirts of town – the brush was too thick. I passed some mowed industrial land that appeared too polluted – besides who knows what the lawn maintenance guys there were spraying. Food rubbish at our Texas parks attract clever great-tailed grackles. Grackles readily prey on unsuspecting young songbirds. They would have no qualms about including a killdeer or two on their menu as well.

I have always found old expansive public cemeteries to be good release sites for small urban wildlife. Visitors arrive without their dogs or unrestrained children. Hawks and other predators are rarely present. Kids with BB guns are run off. Water is often available and insects thrive among the graves and closely mowed lawns. I release a lot of cottontail bunnies in cemeteries. College campuses can be desirable locations too.

So this particular afternoon I took a drive to the Buena Vista Cemetery in Brownsville, Texas. Song birds of all kind find that location to be a safe haven. I go there frequently to tend to my family’s graves. When I chanced upon the recently-installed statue in the composite photo above, I took that as a good luck omen and released those two particular killdeer there. Larger wildlife that are unlikely to be shot I release on ranchland adjacent to the King Ranch which is just north of me. A friend has a gate key. Others along the fences of the Atascosa Wildlife Refuge – with a nudge in the right direction (USFWS prohibits wildlife release on public land). If human-imprinted animals are likely to be shot by hunters, I release them on the unoccupied southern side of the US/Mexico Border Wall. Boca Chica beach and its surroundings were once my favorite release point for recovered raptors pelicans and plovers. Since Elon’s arrival I can no longer do so.