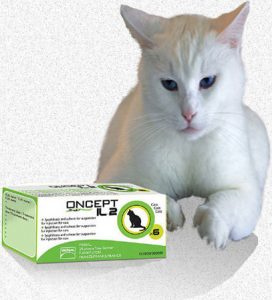 This medication was never marketed in North America. I do not know if that was because of a lack of effectiveness or because potential profits for the manufacturer, Boehringer Ingelheim, did not justify the high cost of licensure. 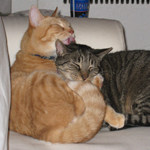 Back To Fibrosarcomas In Cats 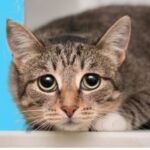 Cat Owner Feedback On Oncept® In Their Cat

*** There is a note about the tyrosine kinase inhibitor, toceranib/masitinib (aka TKI, Kinavet®, Masivet® Palladia® ) at bottom of this page.

There has been a new development in the treatment of feline fibrosarcoma tumors that I want to tell you about.

I mentioned in my article on vaccination-associated feline fibrosarcoma tumors that they were difficult for veterinarians to cure. That is because invisible finger-like projections of cancerous cells project outward from the cat’s visible tumor for quite some distance (highly locally infiltrative). That is why your veterinarian must remove so much surrounding tissue in an attempt to get all of it. Even then, the tissue samples sent to the pathologist after the surgery often come back as having “dirty” margins. That is, cancerous cells extended beyond the portion of tissue that was removed. In those cases, radiation therapy after or before the surgery often extends the period of time the cat remains in remission – just as it does in human breast cancer. (read here)  Since one is never certain that all cancerous cells were removed, post surgery radiation therapy is often given even when it appears that all the abnormal cells were removed.

Merial (now owned by Boehringer Ingelheim), a very progressive vaccine manufacturer, has used a harmless canary pox virus to carry many of their dog and cat vaccine components (antigens) for many years. Although this pox virus spreads thorough out your pet’s body, it does not multiply and it causes no disease because it is a virus of birds, not mammals. Those vaccines are called ALVAC® vaccines. The Merial uses this technology in several of their PUREVAX® and RECOMBITEK® lines for dogs, cats and ferrets. For a time, the same canary pox virus – linked to a different antigen- was given to humans in an attempt to prevent AIDS. (read here)

One of the messenger chemicals of your cat’s immune system that is important in the fight against cancer and infection is Interleukin 2.
Merial has brought to the market a vaccine that contains this canary pox virus that has been modified to produce feline interleukin 2 (IL-2).

In European trials, this vaccine appeared to significantly extend the lives of  cats diagnosed with feline vaccine-associated fibrosarcomas by stimulating the cat’s own cancer defense cells (T-lymphocytes /  natural killer cells). In an initial Company study, the vaccine was reported to reduce the rate of cancer relapse during the 2 years subsequent to surgery by 65% as long as radiation therapy was also given. ( ask me for Jas2015.pdf )

Its success in reducing relapse varies. Tumors over 2-5 centimeters in diameter are more challenging. Cats with other medical problems may not tolerate the vaccine. Cats in which the tumor has already invaded lymph nodes or moved to other locations are also less likely to benefit.

How Is This Medication Used?

This is a series of repeated injections in the areas surrounding where the tumor was located. Recommendations are likely to change as veterinarians get to know the product better; but in the initial European studies, six series of 5 injections each were given into the tissue surrounding the surgical incision scar.

In the initial Merial-sponsored trials in the USA, only cats with no evidence of cancer spread to other organs were eligible. Those with other serious illnesses were also excluded. Cats that had been previously treated with immunostimulant medications were not eligible.  Those having received chemo or corticosteroids had to have ceased taking them 3 weeks prior to beginning the program. Those that lived great distances from the treatment center or whose life changes might prevent follow up studies were also ineligible as were cats in which the tumor had formed in locations other than the animal’s trunk. Veterinarians are now freer to set their own treatment requirements.

How Can I Obtain This Medication For My Cat?

My Merial representative tells me that at the present time, Feline Interleukin 2 Immunomodulator vaccine is only available to cat owners at veterinary centers that specialize in feline oncology treatment. They are scattered around the United States in many major cities.
If you will call them at 888 637-4251 they should direct you to the center closest to you. If not, ask your vet to make the call or let me know and I will do my best to obtain that information for you.

Does This Medication Have Risks?

All of Merial’s other canary pox based vaccines have proven to be extremely safe. Hopefully this one will be as well.  We always find things out that we did not expect when a medication moves from small experimental studies into general public use.  That is why, at least for now (10/10/15), the vaccine is not distributed outside of Merial’s network of specialists.

Other products that contain IL-2 have a narrow “therapeutic window”  (read here &  here)   But this cat vaccine uses an approach to cancer therapy that may be considerably safer. Besides, the risks of not using products like these to save the cat are probably far greater.

I appreciate any feedback you might send to me regarding your cat’s experiences with this vaccine. I will post it on a link from this webpage (with identifying names deleted). Let me know

*** A note about the tyrosine kinase inhibitor, toceranib/masitinib(aka TKI, Kinavet®, Masivet® Palladia®) at bottom of this page.

These similar TKI products have been used to treat mast cell tumors in dogs. In a test tube (in vitro) study, they seemed to offer some hope in treating feline injection site fibrosarcomas that could not be completely removed with surgery. (read here) However, a more recent study did not find them to be of any value.