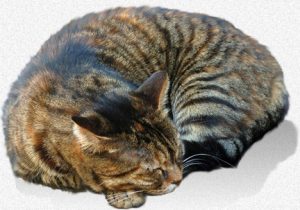 Back To Parent FIP Article

I wrote this article a few years ago. I wrote it primarily about the antiviral compound GC374 (GC) found to be active against FIP. More recently, GS-441524 (GS) , another antiviral compound with similar and perhaps stronger active against the FIP coronavirus of cats has also been tested at UC Davis. US pharmaceutical company greed is the reason nether of these compounds are readily available to you for your cat. Currently, if you want either of them, you will have to deal with the Chinese chemistry black market. Read about that situation here and here.

The March 30, 2016 online issue of the scientific journal, PLOS Pathogens reported startling success in the treatment of experimentally-induced FIP. An antiviral compound (GC376 protease inhibitor ) that was originally synthesized in 2011 while looking for cures for the Norwalk virus was found to have a broad spectrum of activity against other virus – including the coronavirus family – one of which is the cause of FIP.

The experiments were performed at the University of California veterinary school in Davis. Six of eight cats given this drug twice a day for 14-20 days recovered from FIP and, at the time of publication, were apparently healthy – 8 months later. Two were euthanized when their symptoms became too severe to continue treatment. You can read the article here.

FIP “cures” are reported frequently; and the internet is full of fake products making that claim. But these authors are highly respected – including one of the pioneers in FIP research. (ref) UC, Davis was ranked the top veterinary school in the world in 2016 as well. (ref)

Potential breakthroughs of this sort take time to reach practicing veterinarians. It also takes time to discover what, if any, downside a new treatment has or if results obtained in a small number of laboratory-bred cats, given a specific strain of FIP-1 virus, apply to most or all of the FIP infections cat owners, veterinarians and shelters see on a day-to-day basis (not everything that shows promise in the laboratory works quite the same in the outside world [ref] ). Coronavirus is a cunning stubborn enemy

One can following the progress of one little Florida cat with FIP on Facebook. It entered the UC Davis protease inhibitor trials on April 4th, 2016. I believe that 12 cats were initially accepted into that trial.  This cat had the “dry” (granulomatous) form of FIP, not nearly as common a problem as the “wet” (effusive fluid) form. By his second week of injections the granulomas present in his eyes and his general attitude were much improved and he had regained considerable lost weight. Fevers during the period he received his injections were a recurrent problem. It was unclear if they were due to his disease or a side effect of the medication. As of April 23, three of the twelve cats in the initial group were lost to neurological disease with perhaps a 4th to follow; but 8 of the initial 12 had gone into FIP remission. As of June 22, eighteen days after his last protease inhibitor injection, the Florida cat was doing fine.

The best medication dose, dose frequency and the length of time protease inhibitor medications need to be given must still be determined. How long remissions might last is also a unknown. Another big hurdle will be finding a pharmaceutical company willing to pursue the complicated and expensive FDA drug approval process. Big profits marketing such a drug are not guaranteed.  This is a time when high pharmaceutical profits rule both the human and the veterinary marketplace.

I rely on your feedback. If your cat enters an experimental treatment program with this or similar drugs or if you have comments to make, email me.

An August 2016 issue of Clinicians Brief contained an update on the California treatment. It states that as of the writing, no new cats are being accepted for trial therapy. (ref) When the researchers, lead by Dr. Pedersen, have accumulated enough information – as well as the considerable amount of money required to synthesize more of this medicine, they plan to reopen their clinical trials. (ref)

Most of the folks that read my articles are of modest means. They love their pets with all their hearts; but they are not in a position to help Dr. Pedersen and his team with large donations to produce more of the GC376 drug he needs to continue his studies. But perhaps a few individuals blessed with that ability will also read this. When folks like you donate to the many humane organization that fiercely compete for your dollars, perhaps a few dollars will trickle down to the animals that you wanted to help. Perhaps most will be eaten up by administrative costs and bigwig salaries. This year, why not support this project instead ? I am not in the loop. You will need to contact the group directly.

Several years have passed since I wrote the FIP article that brought you here. But in that time, very little has changed regarding what we know about this dreadful disease or the treatment options your veterinarian has to keep your FIP-positive cat as comfortable as possible. None of the medications (interferon, etc.) in the Treatment Options were found to increase the cat’s length of survival.

But I remain optimistic that progress is slowly being made. Nothing to give FIP cats immediate hope – but things that give me hope that it won’t be too long until we do have effective treatment options. The progress is being driven by the huge effort being made to develop anti-viral medications to halt the spread of the human AIDS virus and other chronic viral infections like hepatitis C.

The goal in those cases is not necessarily a total cure. It is to decrease the number of virus (decreased viral load) in those already infected. One group of compounds  that excite medical researchers are the  small interfering RNA molecules (siRNAs)   that have been created in research laboratories. These are not anti-viral drugs as physicians and veterinarians tend to think of them (although some of the new AIDS antiviral drugs are being tried in cats as well [ref ] ). They are compounds that that have the ability to “silence” viral genes. Genes that are vital for the virus to reproduce. Researches are still getting to know siRNAs – what they are capable of doing, what their side effects might be and the best ways to use them effectively. (ref) Because they are not, strictly speaking, anti-viral drugs and because they can be designed to prevent the reproduction of most any microbe, some call them microbicides. (ref)

There are two problems that need to be overcome. The first is that many of these chronic viruses eventually mutate to get around whatever medication is being used to suppress their numbers. The drugs work well for a time; but eventually a new strain of mutant virus appears that has found a way around the point of attack. Coronavirus, like the feline coronavirus responsible for FIP (FCoV), are notorious for their ability to mutate rapidly and frequently.  In 2015, veterinarians in Sidney, Australia announced that combining several siRNA molecules – each aimed a different critical gene within the virus – was able to drastically reduce the number of FIP coronavirus in an experimental system. (ref) To avoid the effects of a combination of siRNAs, each aimed at knocking out a different FIP/coronavirus gene, the virus would have to mutate against each one of the 3 siRNAs simultaneously. So far, the multiple siRNA technique was only a successful “test tube” experiment. How the technique might help FIP-infected cats in the future we do not know.

The second problem is “collateral damage”. All genes are no more than code – not that different from the code I use to write these articles. When the code of a different gene (perhaps an important gene in the cat’s body) is quite similar to the targeted viral genes, siRNAs have the potential to silence those “off-target” genes as well. Research scientists are attempting to overcome that problem too. (ref1, ref2)