A Home-Cooked Low Iodine Diet For Your Hyperthyroid Cat

Veterinarians really do not know why so many older cats develop hyperthyroidism. One suspicion is that cat foods too rich in iodine are part of the problem. But there are well-respected veterinary endocrinologists who believes diets too low in iodine contribute to the problem. Please read the conclusions of one here. Many veterinary endocrinologists also believe that blocking the excessive T4 production of hyperthyroidism with diets such as y/d does not deal with the cat’s underlying problem – abnormal overactive hormone-producing cells in its thyroid gland. If your cat’s kidney function is still adequate, your finances allow and your cat is not yet in its twilight years, radioiodine treatment is still the best way to deal with that.

Until recently, veterinarians had no answers for you as to why so many older cats develop hyperthyroidism. We also did not understand why the number of these cats has been on the increase for quite some time.

Veterinarians had only three ways to deal with the problem: surgically remove the cat’s malfunctioning thyroid gland, treat the pet with anti-thyroid medications (methimazole/Tapazol®), or destroy the thyroid with radioactive iodine. All three treatment options have their drawbacks.

We also had no idea what the root cause of hyperthyroidism in these cats might be. But in the last few years, two important clues were found. The first was that cats that consumed large amounts of commercial fish-flavored cat food were more likely to develop the disease (ref) and the second was that limiting the amount of iodine in a cat’s diet often returned it to normal thyroid hormone levels . (ref)

Many veterinarians, like myself, suspected that perhaps the cats became ill due to the low quality of the fish ingredients in the cat foods (free radials, rancidity, peroxides). (ref) or that chemicals used to line the cans might be involved (ie BPA).

However, it is apparent now that there is a third obvious factor, the type and portions of the fish used to produce these cat foods (anterior portion, heads and skin) can be extremely high in iodine. (ref ) Too little iodine is known to cause hypothyroidism (ref) , and too much iodine can cause hyperthyroidism. (ref) The iodine content of many cat foods – particularly canned ones can be exceedingly high. (ref) and it appears that the NRC guideline on the iodine requirements of cats was also set too high. (ref , fulltext) others believe it was set too low. (ref)

Do I Have A Fourth Option Now?

Read suggestions on the use of y/d here 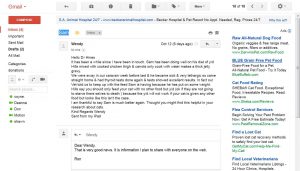 Because of 1990s research in New Zealand, we know that commercial cat foods have widely different levels of iodine in them (ref) and that limiting a cat’s iodine intake lowered the cat’s thyroid hormone (T4) levels – at least briefly. (ref) However those same research scientists were unable to lower thyroid hormone levels long term with their low-iodine diets. They did their studies on a small group of what appeared to be normal cats.(ref) Based on that knowledge, Hills Prescription Diets, used the same approach on hyperthyroid cats and it appeared to be successfully – at least over a 3-month period. (ref) . The formula used is now the basis for Hill’s® Prescription Diet® y/d™. It is severely limited in its iodine content (at or below 0.32 ppm on a dry matter basis). The research that the Company has done seems to show that feeding a low-iodine product such as theirs is a fourth option in treating hyperthyroidism in cats. (ref)

It will be wonderful for cat owners and veterinarians if we find that low-iodine diets solve or even help cats with hyperthyroidism problems. Since the diet is only now becoming available, we will not know that for sure for a while. But I suggest that you either try it as they suggest, or make the diet a part of your cat’s medication therapy. I have never liked the high number of side effects I see with Tapazol and not all of my clients can afford radioiodine therapy for their cats. Even if the addition of the Hills diet is only sufficient to lower your cat’s medication dose, it would still be an enormous improvement over what I can offer you now. I prefer you use the canned product because cats on dry diets rarely consume sufficient water and many are in the process of developing kidney problems as well. Read about those problems here.

Hyperthyroidism and kidney disease often occur together; so your veterinarian will check your cats BUN and Creatinine blood levels and its ability to concentrate its urine (sp.gr). Then your veterinarian will periodically assay the cat’s blood thyroid hormone levels (T4). Your cat needs to make the transition to this diet gradually and, if it is taking medications to deal with its hyperthyroidism, those medications need to be tapered off gradually.

When y/d is working, your cat should begin to gain back some of its lost weight and, more importantly, its blood T4 levels should return to normal or high-normal levels. Signs like vomiting, weight loss, an unkempt coat and hyperactivity that may have brought you to your veterinarian in the first place should improve.

Must My Cat Eat The Hills Diet For The Rest Of Its Life?

Not necessarily – although It will always need a low-iodine diet.

Once you know that a low-iodine diet is helping your cat, you have another option. You can prepare a low-iodine diet at home. I suggest it, because I think that maintaining your cat on a diet that is primarily corn and soybean-based, will bring on its own set of health issues.

Hill’s research seemed to show that a diet that had an iodine level at or below 0.32 ppm on a dry matter basis returned the blood total thyroxine of cats to normal range within 8-12 wks. Experimental, non-hyperthyroid cats, fed a diet as low as 0.17pp of iodine for a year seemed to do well.

How Will I Know The Iodine Content Of The Ingredients I Decide To Feed My Cat?

The chief ingredients to avoid are fish, particularly the type of fish products that often find their way into commercial cat foods, iodized salt, and human foods that contain it, medications that have been flavored with fish additives, and supplements and vitamin preparations that have iodine among their ingredients and kelp and seaweed-containing products. If your home water contains iodine, provide distilled water for your pet. Although iodized salt should not be an ingredient in these cat’s diets, adequate salt, in itself, is essential. (ref)

Dairy meat and egg Iodine levels can also vary depending on how much iodine has been added to the livestock’s feed. (ref)
If your cat goes outside unattended, whole prey animals that it catches also contain iodine.

The iodine content of fish is quite variable. In general, marine fish have more iodine than fresh water fish, and a significant part of that iodine is in or near the head (where the majority of its thyroid glands generally are) and skin.(ref) If you still insist on feeding your cat fish, feed it only fresh water fish (like farm-raised catfish and tilapia) and then only the fillet portions. Supermarket fish can lead to other problems – like thiamine deficiencies (thiaminase-activity). (ref) And remember that fish, just like red meat and poultry, does not contain sufficient calcium or vitamins to be fed to your cat as a sole diet.

Hills expresses the iodine content of their y/d diet in parts per million or ppm of dry ingredients . Most nutritionists publish their data as the quantity of iodine present in 100 grams of prepared (“wet”) food ingredients.

Most food ingredients that one would use in preparing a cat’s home cooked diet are 50-80% water. So you can not make exact comparisons using the published tables I know about without doing a bit of math. But you will have a good idea as to which ingredients are likely to be low in iodine and which are likely to be high.

You may find the Norwegian Food Tables helpful. You can read their iodine analysis of food ingredients here. Another good source of data for selecting low-iodine meat and common foods is the Japanese Nutrient Table .

Another extensive analysis of the iodine content of foods was performed in Greece. You can read that article here.

As I mentioned earlier, please also remember that you cannot maintain your cat on an all-meat diet without additional calcium and vitamin supplementation. (ref)

What About Keeping Dietary Phosphorus Low?

Many hyperthyroid cats have co-existing kidney problems. But the BUN and Creatinine levels of these cats can appear normal due to their excessive drinking – until their hyperthyroidism is controlled. At that time their blood levels of BUN, creatinine and phosphorus can rise to dangerous levels. Cats with overly-high blood phosphorus levels can benefit from a diet low in phosphorus as well as a very high fluid intake. (ref) So home cooked diets in these cats need to be low-to-moderate in their phosphorus content as well. That generally means a diet higher in plant ingredients and low-phosphorus grain ingredients than I generally recommend. You can read about the phosphorus content of various food ingredients here. A second approach is to give these cats phosphorus binders .

So the whole concept of iodine restriction (with a commercial product like y/d or a home-cooked diet) in a cat in a partial, masked or full uremic state needs to be carefully thought out by your veterinarian. The added stress of diet change may be too great for many of those cats to bear.